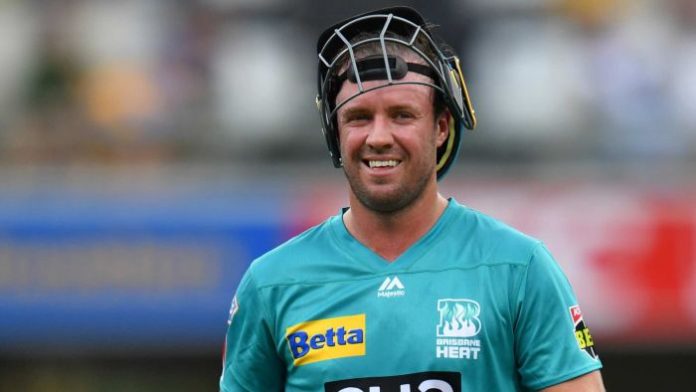 South African cricketer AB de Villiers will not be playing in the upcoming edition of the Big Bash League 2020-21 in the land down under, starting December.

Pegged to play for Brisbane Heat, the team’s coach and former Australia head coach Darren Lehmann was keen on re-signing ‘Mr. 360’ to have him play for the Heats again in the summer.

However, it was soon revealed that AB and his wife are expecting their third child fairly soon.

Coach Lehmann said, “The main one, aside from the challenges represented by COVID-19 and international travel, is that AB and his wife Danielle are expecting their third child very soon.”

Clearly, the ongoing pandemic and the associated uncertainties and risks around the travels also played an important role in de Villiers’ decision to sit out the Big Bash League this year.

Lehmann further cited de Villiers’ form in the IPL for the Bengaluru side, mentioning that it was his ‘excellent touch’ in the tournament there that paved the way for his future with Brisbane Heat.

A Change in the Betting Paradigm?

It is still too early to say how the betting markets will be impacted, but considering the Big Bash League betting tips, De Villiers sadly won’t be a part of it. This will certainly prompt bookmakers to offer generous odds on other batsmen across the markets available.

Plus, it also gives an opportunity to local, home-grown talent to prove their mettle and make a name for themselves. Of course, a clearer picture will emerge as we head into the tournament – the performances from the first few matches should tell us which batsmen are worth keeping an eye out for and making the bets.

But He Will be Back…

AB de Villiers was signed by the Brisbane outfit in September 2019 to play that season. However, it was a lacklustre performance by the Protean and the team, as the side finished at the 7th position in the league in the eight-team tournament.

The 36-year-old, speaking with passion, as usual, mentioned that there is some ‘unfinished business’ and he is open to the idea of returning to the club in the future. The only way this can happen is if the conditions improve.

In a statement released by de Villiers, he added, “I am very open to returning to the club in the future. The team didn’t get the results we were hoping for and I consider there is some unfinished business to deal with.”

That said, for the time being, it is evident that de Villiers will be focusing on his family and spend time with his wife Danielle, preparing for the arrival of the newest member of their family.

A Valuable Player to Have

Time and again, AB de Villers has proven himself to be a prolific player of the sport, especially in the T20 format. Starting his batting career in 2004, he has emerged as one of the greatest cricketers in South Africa.

With a plethora of records and experience under his belt, his fame in the T20 format elevated to the next level, following his ongoing stint with the Royal Challengers Bangalore. Having played for the side in the IPL through the years, he honed his talent in the league and soon found himself in high demand from other international leagues.

The Big Bash League starts on December 3, with the final to be played on February 6.

Team India gets MPL as their new shirt sponsor