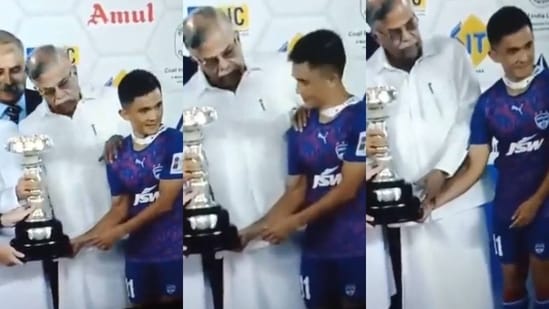 The incident happened during the trophy presentation ceremony after the match. La. Ganesan was standing slightly behind Chhetri while the photo was taken of the trophy being handed over to the Bengaluru captain. It was then seen that the minister pushed Chhetri to go in the middle to be photographed with the trophy.

The minister’s behavior did not go down well with football fans on social media, who openly and loudly criticized the Governor for his “shameless behaviour”.

What a shameless Behavior
“Photo meh aanahe.. oorkya” 😡
Respect the Player. He is not only a player . He is the Captain, Leader, Legend #SunilChhetri #Indianfootball #DurandCup #BFC pic.twitter.com/arRexnNRtZ

Sunil Chhetri should have done what Australian players did to Sharad Pawar back in 2006.
Bhai, this is shameful!! https://t.co/0QUYGwNL64

WB Governor pushing away captain Sunil Chhetri the winner of Durand cup 2022 to stay in the limelight.

The captain should have walked away pic.twitter.com/kqAPGxjx5j