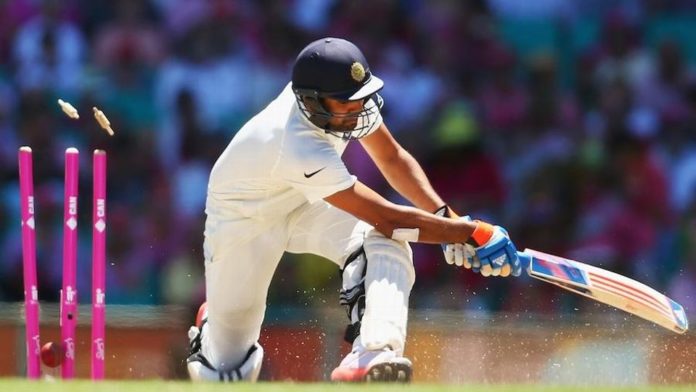 Following his recent failure in the 1st test vs Australia, Rohit Sharma’s position in the test side has become a huge question mark. 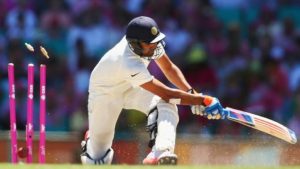 “Cricket is an art. Like all arts it has a technical foundation. To enjoy it does not require technical knowledge, but analysis that is not technically based is mere impressionism.”  These were the quotes from the famous historian Cyril Lionel Robert James. A cricketer right from his childhood days is taught to perfect the basics and master nothing but the red cork ball that is delivered towards him.

Rohit Sharma or the ‘Hitman’ as everyone calls him made his international debut in the inaugural edition of the World T20 way back in 2007. He played 2 crucial knocks in the tournament out of which one came in the all important final vs Pakistan.

Immediately following his success in the tournament, he was granted an opportunity to travel with the side for the tri-series tournament that was held in January the following year. The early years of Rohit’s career saw him play in the middle order, often failing to make a significant contribution and being dropped as a result of it.

The major break that came Rohit’s way was in the 2013 Champions Trophy. Following the retirement of the great Sachin Tendulkar and with both Virender Sehwag and Gautam Gambhir going out of favour, it was Murali Vijay who had the opportunity to open the innings along with Dhawan. The duo recently had a successful outing vs Aussies that saw India whitewash the visitors 4-0.

The warm up games that were played prior to the tournament saw Vijay lose his form and get out early. This prompted the then captain MS Dhoni to promote Rohit Sharma up the order and partner Shikhar Dhawan. This was the moment that saw Rohit’s career take shape.

Since then, the Mumbai batsman hasn’t looked back, mastering each opponent he’s played against. The 31-year old has so far played 183 ODIs and 84 T20Is for India, in which he has scored 6748 and 2086 runs respectively both at an impressive average. He has amassed 18 hundred in the 50-overs format and is the only cricketer on the planet to score three double centuries in ODI cricket. The right-hander also has 3 T20I hundreds to his name and one of them being the joint-fastest century which came off just 35 balls against Sri Lanka in 2017.

While, Rohit currently stands as one of the most destructive players in the limited overs format, the 5-day games have always come to haunt him. Following the success in Champions Trophy in 2013, he was rewarded with a place in the test side when West Indies toured India later that year.

He scored a scintillating ton on debut at the Eden Gardens in Kolkata and followed it with another century in his second match during his innings of 111 runs at the Wankhede Stadium and also became the only third Indian cricketer to score back-to-back centuries in the first two Tests.

Despite this rocking start to his test career, he couldn’t make his further chances count. Once again after a exceptional home series vs Sri Lanka last year, he found his place back in the side to the tour to South Africa. But Rohit couldn’t make this chance count has he flopped big time.

The poor form of the openers has once again seen the recalling of Rohit for the tour of Australia. After several failures, the fans still expected him to correct them and come back strong. But as before he once again flunked in both innings, not contributing much to the team’s total.

There may be many reasons to why Rohit, who performs at a different level in the T20s and ODIs cannot perform well in tests. These are a few reasons that we think that might be a cause to his poor test form.

Rohit Sharma isn’t the first player to find test cricket difficult. Various top players such as Aaron Finch, Alex Hales and many more have found the longer format difficult to cope with. The reasons when analysed comes to a single attribute which is the ‘Shot Selection’.

There are many players who portray a different style of play in T20s and completely change their game play when it comes to tests. But Rohit Sharma’s failure to adapt to this format has cost him big time. His lazy shot selection has not helped him and has been a part of his downfall.

Despite profiting from two 6s in the first innings vs Australia, he played a shot too many that eventually cost his wicket and a golden chance to reclaim his lost position back.

Rohit started his career a decade back playing in the middle order. He couldn’t find much success before opening the batting for India in 2013. Making him revert back to the middle order in test matches hasn’t helped his cause any bit.

The man who faces the new ball in the limited overs format has found it difficult to accept his new role has a No.6 batsmen, who is often exposed to the reverse swing deliveries.

Prior to the tour of Australia, he has suggested that he would even be ready to open the batting if needed. Only time will tell whether he can make those chances count.

3. Difficulties in handling the red ball:

It is true that the red ball tends to move and swing more than the white one. That is why test cricket is supposed to be the real test of strength and endurance. But when given a come back into the side, Rohit has had to face bowlers such as Vernon Philander, Kagiso Rabada, Mitchell Starc and Josh Hazelwood to prove his worth.

This has proven to be a setback for the Mumbai lad as facing the above bowlers require a lot of concentration and patience which Rohit clearly lacks.

With another disappointing outing vs Australia in the 1st test, it is clear that the red ball cricket isn’t Rohit’s piece of cake. In case he gets to retain his place in the side, it is high time that he sorts out his technique and adapts to the format before any other youngster comes in to take his place in the side.