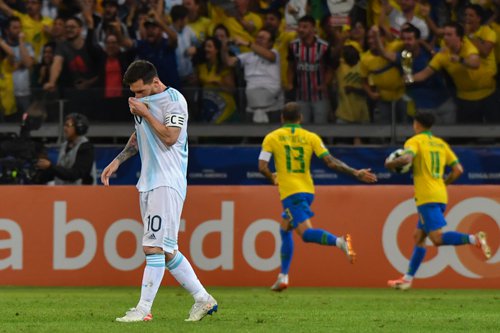 Lionel Messi has had to bow out of another major international tournament as Argentina lose two nil to hosts Brazil in the Copa America 2019 semi-finals. Many fans thought a second edition of Messi’s depression-led retirement was enroute but Messi’s words after the game reassured the worried lot. 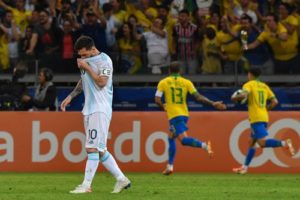 “Something new is on the horizon,” he told reporters, adding that he hoped the fans in Argentina would recognise the side’s efforts during the tournament.

“I hope we are respected and not criticised. They should let the team be and let them grow.

“The truth is I have got on very well with this group of players and if I have to help in some way I will. This is a great group which is growing and if I can join them I will.”

Argentina felt several calls went in their bitter rivals’ favour, and Messi said: “They were not better than us. They found the net early and the second goal came from a penalty they didn’t award.

“The officiating was crazy. There were clear penalties, on (Nicolas) Otamendi, on ‘Kun’ (Sergio Aguero).

“He (the referee) was on their side. In every divided ball or dispute, he inclined the pitch their way.

“It’s not an excuse, but the truth is that, in this Copa, they kept on blowing for stupid things, for handballs, penalties. But today, they didn’t even go to VAR when there were clear plays that should have been looked at.”