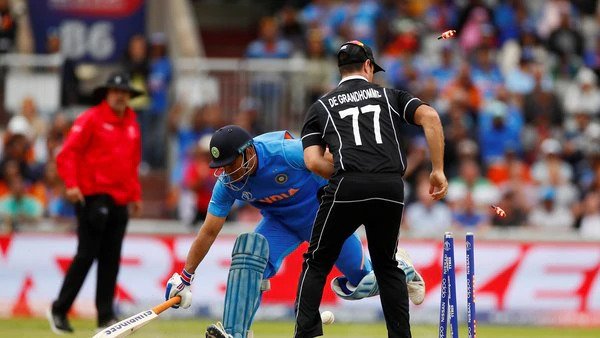 Indian leg-spinner Yuzvendra Chahal revealed that he ‘struggled’ to hold back his tears when MS Dhoni got out in India’s chase against New Zealand in Old Trafford at the World Cup 2019 semi-final. The youngster mentioned that the defeat was hard to digest and that he couldn’t control himself after the veteran wicketkeeper’s dismissal.

Chahal arrived at the crease after Dhoni’s effort came to an end in the 49th over during their 240-run chase against the Kiwis. The rain-afflicted semi-final saw Dhoni along with Ravindra Jadeja almost pull off a miracle with a 116-run stand which took a panicked India from 92 for 6 to 208 for 7. With MS Dhoni’s dismissal, India’s hopes of reaching the final coming to an end.

And in a recent interview, Chahal said that he tried to control his tears when he came down to bat. India were ultimately bowled out for 221 after Chahal, the last man, got out for 5.

“It was my 1st World Cup and when Mahi bhai (MS Dhoni) got out and I was going in (to bat), I was trying to hold back my tears. It was so depressing.” Chahal said.

“We played so well for 9 games but suddenly we were going out of the tournament. Rain wasn’t in our hands and so it won’t be right to say anything (about the interruption). It was the first time that we really wanted to go back to the hotel as soon as possible from the ground” he further added.

Despite the semi-final defeat, India came out as table toppers in the league-stage table with 7 wins in 9 matches. But the top order’s dismal performance in the game at Manchester helped New Zealand book a place in the final game of the tournament. India were reduced to 5 for 3 after Rohit Sharma, Virat Kohli and KL Rahul were dismissed for 1 each while chasing 240.