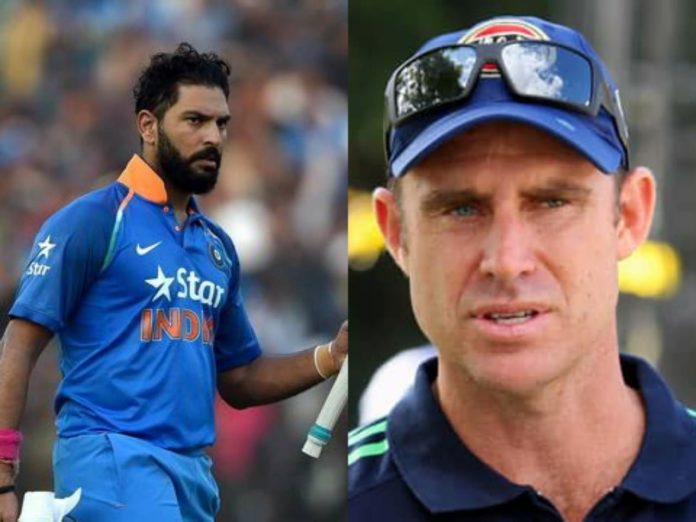 The Indian team will go up against a powerful Australian side tomorrow, the 9th of June. But the game already seems to have started on twitter as Yuvi came up with a fitting reply to Hayden’s tweet. In a promotional video for the upcoming match, an actor in Indian jersey is shown with two World Cups. But then enters the Australian supporter, with five trophies. The Indian gets mocked in front of all the other participating nations. This video was made to show that Australia has won the tournament five times, against India’s two.

Tagging this video, Matthew Hayden asked YUVSTRONG12 (Yuvraj’s twitter handle), if he had seen this promo. He also asked the Indian all-rounder to give him a high-FIVE for Australia. See you guys on June 9.

Hey @YUVSTRONG12, this new @StarSportsIndia promo for ICC #CWC19 is darn good!
Did you watch it? Gimme a high-FIVE for #INDvAUS mate! 😂
See you guys on June 9! 😎 🏆🏆🏆🏆🏆 V 🏆🏆#CricketKaCrown pic.twitter.com/hqidKCQgAN

However, Yuvraj Singh has a strong feeling that India will be the better team on Sunday. Hence, a confident Yuvraj came up with a reply.

Stop showing off those 5 titles, Haydos. 😏 Just to let you know, we're gonna be TWO good for you in #INDvAUS on June 9!#CricketKaCrown hum #LeJayenge!! 👊@StarSportsIndia #CWC19 https://t.co/VEWCuXdwaA

However, it was not supposed to end up here. The Australian had some more spice to add to this conversation.

Hahaha…..yes bro as they say if ya got it show it✌️ You should know smacking sixes off everybody all those years. I suppose when you’ve got 5 in the trophy cabinet what’s 6 gonna mean. Maybe we should let @BCCI catch up this year 3 to 5 would be bit closer 🤪🤣 https://t.co/Usrik1TQKy

However, talking about the two teams, both India and Australia are touted as favourites to win the cup. Both the teams are enjoying an unbeaten run in the tournament thus far. It is going to be a nail-biting encounter. India will hope that their batting delivers the goods against the Australian pace-attack, which is one of the best in the tournament.