Former Indian cricketers Yuvraj Singh and Gautam Gambhir have always shared a great camaraderie. Both players have always shown mutual respect for each other. Gambhir has previously claimed that Yuvraj Singh is the best white ball player that India has produced. On the other hand, Yuvraj has always given positive remarks about Gambhir. 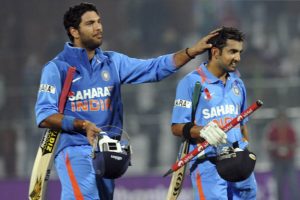 Recently, both legends got involved in a hilarious exchange on Instagram. On Tuesday, Gautam Gambhir shared a throwback picture of his cricketing days. Tagging Yuvraj in the post, he wrote that it’s a good thing he and Yuvi had a smile on their faces in the snap or else everyone would have assumed that the legendary allrounder was stopping him from getting into a fight.

Gautam Gambhir was always known to be aggressive and he never hid his emotions. His on field altercations with Virat Kohli, Shane Watson, Shahid Afridi and Kamran Akmal are well known in the cricket fraternity.

Yuvraj Singh responded to the post that even though in the snap he was not stopping Gambhir for a fight, he has pulled the Delhi lad out of a tussle on multiple occasions.

“I always had to do that to stop you from getting into a fight,” the southpaw commented on the post. 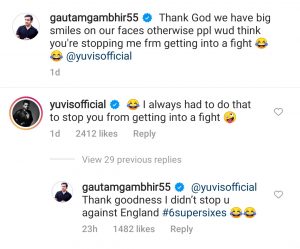 The fans were also happy to see the off-field camaraderie of the two, and soon the comment section of the post was flooded with their reactions.

Both Gambhir and Yuvi were a part of the World Cup winning squad in 2007 and 2011. Not only that, both the legends played an important role and helped India lift both the cups.

Gautam Gambhir was the MVP in the finals in 2007 and 2011. He was the top scorer for the Indian team on both occasions and ensured India’s strong position in the mega event.

On the other hand, Yuvraj played a critical role throughout the tournament in 2011. He ended up winning the player of the tournament award as well. In 2007, he lit up the tournament with his exhilarating knocks against England and Australia.