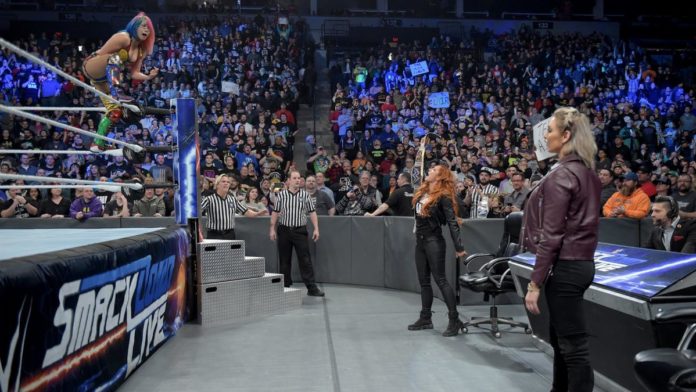 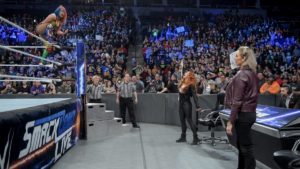 This week, SmackDown LIVE kicked off with the return of SmackDown Women’s Champion, Becky Lynch. Without wasting much time, The Man went straight to the point and called out her former best friend, Charlotte Flair.

The two superstars engaged in a war of words before General Manager Paige stepped in to calm things down and ultimately, rewarded Charlotte with a Women’s Championship opportunity at TLC.

The Usos vs The Bar

The Bar took the upper hand in the first half of the match before Jimmy Uso tossed Sheamus over the top rope and gave himself some breathing room to tag in Jey Uso.

Jey was on a roll and came close to sealing the pinfall victory with the Superkick but Sheamus kicked out at two. The Bar managed to evade a series of strikes until the Usos took out Sheamus and launched a 2 on 1 attack on Cesaro to secure the win and a future SmackDown Tag Team Championship opportunity.

Shinsuke Nakamura attacked Rusev prior to the match and struck him on the back of his neck. The United States Champion then followed it up with a couple of Kinshasa strikes firstly, inside the squared circle and later, outside the ring.

AJ Styles made his first appearance in two weeks after losing the WWE Championship to Daniel Bryan. The Phenomenal One called out the WWE Champion and said that they did not have to wait till TLC to face each other.

However, to AJ’s disappointment, Bryan wasn’t in the building and later, remarked that his opponent’s newfound attitude was probably because Daniel was watching Monday Night RAW and he must have been getting his ideas from there

Kofi Kingston vs The Miz

Following their backstage encounter, The Miz battled New Day’s Kofi Kingston. The A-lister took control but was unable to avoid the outside interference of Xavier Woods and Big E at ringside.

Miz exposed the turnbuckle while the referee was checking on Kofi however, his plans were spoiled by Big E. He then tried to use a steel chair while the official was distracted by Big E but once again failed as Woods snatched it away and further allowed Kingston to land the Trouble in Paradise for the three count.

Randy Orton stated that his actions last week wasn’t meant to disrespect the Lucha culture but instead, it was meant to embarrass Rey Mysterio. The Viper’s promo was cut short as Mysterio interrupted and made his way down to the ring in a neck brace.

However, Rey’s bravery didn’t last long as Orton took advantage of his injured neck and tried to rip the mask off his head again. The former World Heavyweight Champion regrouped and attacked Randy with a series of strikes on his left leg.

Mysterio was then able to deliver a couple of 619 to The Viper but his attempts of using the steel chair proved to be unsuccessful as Orton landed the Snake Eyes DDT and continued the vicious onslaught on his enemy.

The entire SmackDown roster paid their tribute to Jeff Hardy which was further, capped off by a resounding ovation from the WWE Universe. The celebration was cut short by Samoa Joe, who had some very harsh things to say about Hardy and made references about his dark past.

After listening to Joe’s words, the Charismatic Enigma Jeff Hardy was only in the mood for a fight. Samoa Joe momentarily obliged to his counterpart’s challenge but turned his back and exited the arena.

Zelina Vega was the first to be eliminated by Lana until the Ravishing Russian was then sent over the top rope by The IIconics. Billie Kay and Peyton Royce’s teamwork didn’t withstand much longer as the duo was eliminated by Asuka.

Naomi, Mandy Rose, Sonya Deville, Asuka and Carmella were the final five competitors remaining until the latter was taken out by The Empress of Tomorrow. Deville avenged her partner’s elimination by sending out Naomi.

Sonya and Asuka remained as the final two. Following a close bout on the apron, Asuka eliminated Deville to win the Battle Royal and made her entry into the SmackDown Women’s Championship match at TLC.