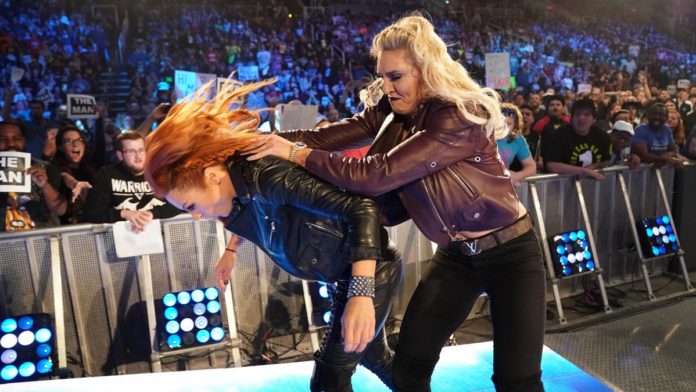 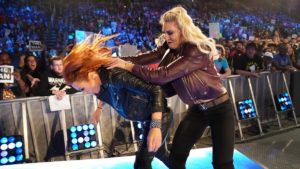 Buoyant after winning the 2019 Women’s Royal Rumble, Becky Lynch kicked off last night’s episode of SmackDown LIVE and was welcomed by resounding cheers from the WWE Universe.

However, her celebration was crashed by Charlotte Flair, who firstly congratulated The Man but her following statements struck Lynch’s nerve as she punched The Queen right in the face before a brawl broke out between the two.

Rey Mysterio was scheduled to fight Samoa Joe but instead, Zelina Vega made an appearance. While Rey’s attention was diverted towards Vega’s claims, Andrade ambushed his counterpart from behind and even though Mysterio did fight back, it wasn’t enough as Cien eventually delivered the Hammerlock DDT.

New United States Champion Shinsuke Nakamura was in full throttle mode as soon as the bell rang and laid out a brutal punishment on R-Truth. But, one slight mistake from the King of Strong Style was all Truth needed as he rolled up Nakamura in the small package for the three count and to the shock of everyone, became the New US Champion.

Rusev was in total control right from the get-go as he looked to recapture the United States title. The Bulgarian Brute didn’t allow any breathing room to his opponent however, one error was all that R-Truth needed to capitalize, as he dodged a rushing Rusev in the corner and used the momentum to score a quick pinfall victory and regain his US Championship.

The Best Championship Celebration in the World

Shane McMahon first presented The Miz with a video package that showcased their journey to becoming SmackDown LIVE Tag Team Champions. Later, Shane called out the A-Lister’s father, George Mizanin to the ring with the latter stating that he loved The Miz and was proud of him.

The New Day, The Bar, The Usos and Heavy Machinery all battled to earn a SmackDown Tag Team Championship at Elimination Chamber next month.

The New Day were the first to be eliminated courtesy of a double team manoeuvre by Otis Dozovic and Tucker Knight on Kofi Kingston. Later, Heavy Machinery followed The New Day backstage as an uppercut from Cesaro stunned Knight and allowed Sheamus to land the Brogue Kick for the pinfall.

The Usos took advantage and didn’t allow recovery time for The Bar as they went straight on the offence and Jey Uso hit the frog splash on The Celtic Warrior for the three count.

After Bryan’s statement, AJ Styles was the first of five superstars to interrupt and make a claim as the No.1 Contender for the WWE Championship, followed by Randy Orton, Jeff Hardy, Mustafa Ali and finally, Samoa Joe.

A brawl eventually broke out between the superstars while Bryan took his place on the announce table and claimed that he will be Champion forever. However, Triple H had other plans in mind and announced that the WWE Champion will defend his title against all five superstars in the ring in an Elimination Chamber match next month.