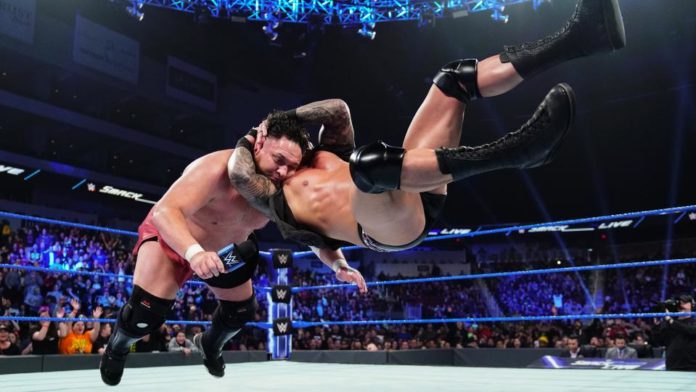 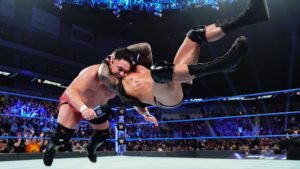 The final episode of SmackDown prior to the Royal Rumble PPV got off to a fiery start as Asuka, Becky Lynch and Charlotte Flair confronted each other, until the SmackDown Women’s Champion attacked The Man from behind and eventually a brawl broke out between the two superstars.

Naomi released her all anger and aggression right from the outset on Mandy Rose. The former SmackDown Women’s Champion had the upper hand for the majority of the match until a slight interference from Sonya Deville ringside gave Rose the opening to send Naomi crashing into the steel post and bring her back inside for the pinfall.

The Miz vs Cesaro

In an evenly contested match, Cesaro and The Miz traded some stunning blows early on in their matchup. The A-Lister took control during the second half of the bout but one uppercut from the Swiss Cyborg was enough to change the complexion of the match.

Meanwhile, Sheamus eliminated the presence of Shane McMahon at ringside and later, kicked Miz right in the face while the official’s attention was diverted, allowing Cesaro to land the Neutralizer for the three count.

In what was supposed to be a face-to-face encounter between the Champion and the Challenger, The New Daniel Bryan instead did all of his talking from outside the ring.

A frustrated Vince McMahon directed the WWE Champion to get inside but Bryan didn’t obey and AJ Styles took the matter into his own hands. The Phenomenal One set his counterpart in position for the Phenomenal forearm but Bryan hid behind the Chairman and took the opportune moment to land the running knee on Styles.

An aggressive Samoa Joe handed out some brutal and punishing strikes on Mustafa Ali as soon as the bell rang. However, during the latter stages, the former Cruiserweight Star found some momentum and delivered a couple of superkicks on Joe.

Ali looked to finish the match with his signature move, the 054 splash, but Joe managed to reverse it into the Coquina Clutch and picked up the win by submission.

Rey Mysterio and Andrade “Cien” Almas put on another classic match in the main event of SmackDown last night. With Zelina Vega banned from ringside, Almas picked up the first fall as he delivered a powerbomb on his opponent off the top rope.

Mysterio evened the score by countering Andrade’s attempt of another powerbomb and reversed it into a flipping piledriver for the three count.

Rey was closing in on the second and final fall as he struck Cien with the 619 however, he was intercepted by Samoa Joe and was powerbombed on the apron by the Samoan Submission Machine, while the referee ended the match via disqualification.