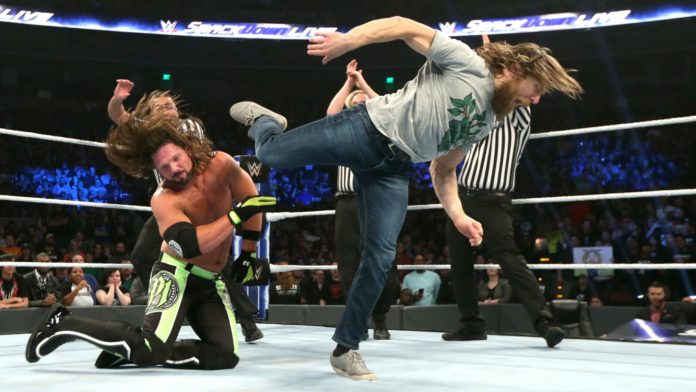 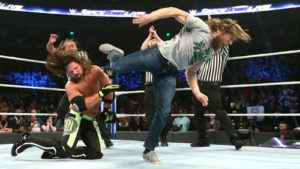 This week’s episode of SmackDown LIVE proved to be another feisty one and undoubtedly, topped RAW once again in the ratings. The show kicked off with the contract signing for the first-ever Women’s TLC match on December 16.

‘The Man’ Becky Lynch was not shy of making obvious remarks against Charlotte Flair and stated that she was handed another title opportunity and didn’t earn it. After the three superstars penned the contract, Mandy Rose and Sonya Deville made their way down and GM Paige injected them in an impromptu tag team match against Charlotte and Asuka.

Charlotte took control of the match after being tagged in early during the bout by Asuka. The duo got along pretty well and The Queen struck Sonya Deville with a spear but a timely intervention by Mandy Rose prevented her from getting the pinfall.

Mandy was a cause of interference for on the apron and a strong right hand caught Charlotte off-guard, however, the former Women’s Champion retaliation inadvertently took out Asuka instead. The Empress didn’t take a kind liking to Flair’s attack and repaid her partner with a knee to the head that allowed Deville to capitalize and score a huge upset victory.

A riveting encounter between these three superstars arguably proved to be one of the best matches last night on SmackDown. Cesaro took time out in the early stages of the match to strategize with Sheamus as Jey Uso and Xavier Woods battled on.

The Swiss Cyborg displayed an incredible feat of strength and power when he swung Jey Uso around the ring and simultaneously, had Woods caught up on his shoulders. Cesaro locked New Day’s third member in the sharpshooter which was eventually broken up by Jey.

Cesaro tossed Woods outside but was instead, met by a superkick when he turned back and that proved to be enough as Jey Uso picked up his maiden win in triple threat singles competition.

The ‘New Daniel Bryan’ did not have any kind words and called out the WWE Universe as sheep. The Miz also proclaimed that all this while, he was right and claimed that they must do everything to win.

AJ styles soon intervened but Bryan launched Miz into Styles, nonetheless, was unable to escape as Styles chased him down. The A-Lister also seized the opportunity to deliver a skull crushing finale to the Phenomenal One.

These two accomplished superstars once more reignited their age-old rivalry. The Charismatic Enigma Jeff Hardy took command when he delivered a back suplex to Randy Orton on the table.

But, when Hardy reached the top rope to deliver a Swanton bomb on the table, Samoa Joe interrupted from a Bar when he appeared on the titantron. Jeff’s attention had totally diverted to Joe and it gifted The Viper the opening to strike his opponent with an RKO for the three count.

AJ Styles vs The Miz

Daniel Bryan was ringside at commentary but AJ Styles did not let his presence have an effect on him. Miz looked to have wrapped up a huge win when he sent the Phenomenal One crashing into the steel steps and then delivered a skull crushing finale back inside the ring but AJ kicked out at two to the shock of the A-Lister.

The assault left a huge deal of pain in Styles’ left leg that was later capped off when Bryan tried to pull his counterpart to the outside but AJ was able to evade the interference from his bitter enemy. The Miz looked to take advantage of the distraction but his counterpart reversed it into a calf-crusher and had no choice but to tap out.

After the match, the WWE Champion laid out a brutal onslaught assault on his challenger by specifically attacking AJ’s injured leg and had the knee hooked in before being separated by the referees.