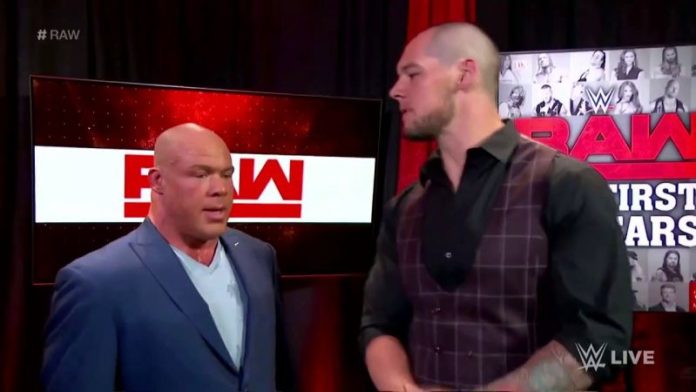 The 2018 edition of Survivor Series will emanate from the Staples Center in Los Angeles, California on the 18th of November. The pay-per-view, usually, features a traditional 5-on-5 tag team elimination match between the Raw and SmackDown superstars with the brand supremacy at stakes. In addition to that, an elimination tag team match to decide the General Manager of Raw might also take place.

According to WrestleVotes, WWE is planning a  major 5-on-5 traditional elimination tag team match with Kurt Angle and Baron Corbin as the captains. Moreover, the winning team captain will become the GM of Monday Night Raw. Here is the concerned tweet from WrestleVotes.

Hearing that Survivor Series won’t be focused to much, if at all, on RAW vs SmackDown this year. Good chance at a Team Corbin vs Team Angle matchup for RAW control.

As of now, we have no idea when Kurt Angle will return. Meanwhile, Baron Corbin isn’t doing his job as the General Manager impartially. The Lone Wolf had even granted himself a match for the Universal Championship although there were far more deserving wrestlers in the locker room.

The fans and the superstars in the locker room can’t stand Baron Corbin’s favoritism. They need a just and unbiased General Manager and, Kurt Angle is a worthy candidate for that. Let’s hope that this rumor comes true and Kurt Angle, eventually, becomes the new General Manager of Raw.