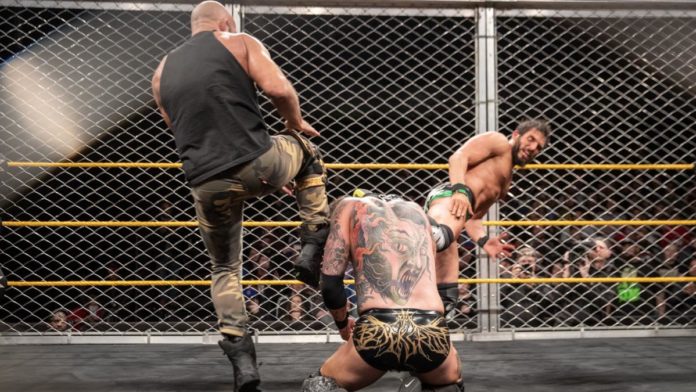 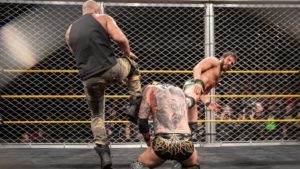 The field for the Fatal 4-Way No.1 Contenders match for the NXT Women’s Championship was completed last night on NXT as Io Shirai was confirmed as the final entrant.

Two-fourths of the 4 Horsewomen, Jessamyn Duke and Marina Shafir made their NXT TV debut last night. The former MMA competitors cut the ring in half and laid out severe punishment to Dakota Kai, barely allowing her any room to tag in newcomer Io Shirai.

However, Kai had a last gasp of breath remaining to stun Duke with a heel kick, giving her the opening to tag in Shirai. The Japanese Superstar flew right off the gates and delivered a 619esque tiger feint kick to Shafir, to put her team in control.

During the closing stages, Duke and Shafir looked to finish the match with a 2 on 1 advantage but Kai appeared out of nowhere and eliminated Duke allowing Shirai to focus on the legal, Shafir and grab the win for her side by hitting a picture perfect moonsault for the three count.

Dominik Dijakovic made his much anticipated NXT debut and looked beyond impressive.  Aaron Mackey barely stood a chance as Dijakovic clobbered his opponent and generated some resounding strikes right from the outset to pick up a dominant victory in his first match at Full Sail.

Heavy Machinery had the perfect warmup for their upcoming tag team title showdown against Undisputed Era. Tucker Knight and Otis Dozovic sent out a potential warning to the Tag Champs of what’s in store as the duo made short work of their opponents and registered a crushing win ahead of next week’s matchup against Roderick Strong and Kyle O’Reilly.

In what turned out to be a remarkable back and forth contest, it would be safe to claim that the conclusion was spoiled by outside interference.

NXT Champion Tommaso Ciampa intervented and entered the steel cage but to the shock of everyone in the arena, Gargano and Ciampa briefly became allies as the former DIY teammates attacked their common foe, Aleister Black.

Prior to Ciampa’s arrival, both Gargano and Black ruined their chance of exiting the cage due to the hate that has saturated among the two in recent months, since both came back to lay out even more punishment on each other instead of taking the easy route to victory.

Meanwhile, Johnny Wrestling and the NXT Champ brought back memories of DIY as a series of double-team maneuvres left the Dutch Destroyer deadened in the centre of the ring, as Gargano picked up the pieces and earned the win courtesy of an assist from Tommaso Ciampa.