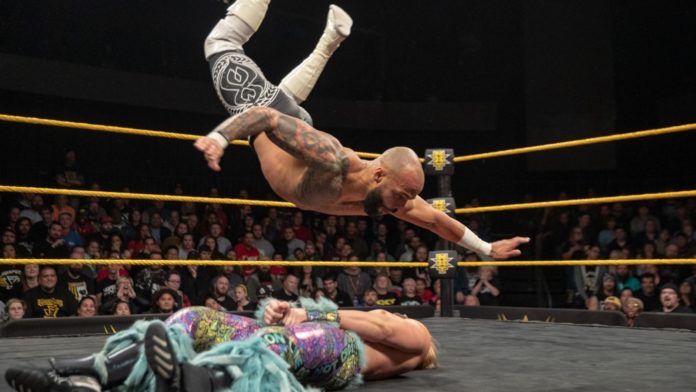 Prior to the start of this week’s NXT episode, GM William Regal unveiled Lacey Evans as the second entrant into the Fatal 4-way No.1 Contenders match for the NXT Women’s Championship.

Redemption and revenge was the priority for EC3 against Undisputed Era’s Bobby Fish, who injured the Top One Percent’s right knee a couple of months back.

EC3 was successfully able to downplay the presence of Fish’s teammates ringside and take control early on but that didn’t last long as a mere distraction from the Undisputed Era allowed Fish to bounce back as he targetted his opponent’s knee.

Fish was very focused on re-injuring his rival’s knee once again but a slight lapse in concentration gave the opening for EC3 to apply the small package roll-up for the three count.

The former Mae Young Classic Participant was pushed to the limits as Reina Gonzalez’s incredible feat of strength and power almost grabbed her an unlikely victory.

However, Yim countered Gonzalez’s attacks with her quickness in the ring and battled her way out of some vicious strikes and a submission hold to eventually earn a  win and make her way into the fatal 4-way No.1 Contenders match for the NXT Women’s Championship.

The team of Oney Lorcan and Danny Burch kicked off the match with some high offence and it was no looking back from there. Both superstars laid out some brutal attacks on Nick Miller and Shane Thorne, barely allowing them any room to launch a swift comeback into the game.

The Mighty were left clueless as Lorcan and Burch finished the bout with a Wheelbarrow DDT and wrapped an impressive win in minimal time.

Tyler Breeze made his first NXT TV appearance in over three years as he challenged Ricochet for the North American Championship.Prince Pretty showed no ring rust as he locked in the Champion in a knee bending leg lock right at the outset.

The NXT Universe was filled with support for Breeze as he countered Ricochet’s springboard moonsault with a superkick and nearly pulled off a huge upset on his return.

Similarly, Prince Pretty’s efforts of delivering his finisher also turned out to be unsuccessful as Ricochet caught him midair and applied the fireman’s carry into the Michinoku Driver for the pinfall to retain his North American title.