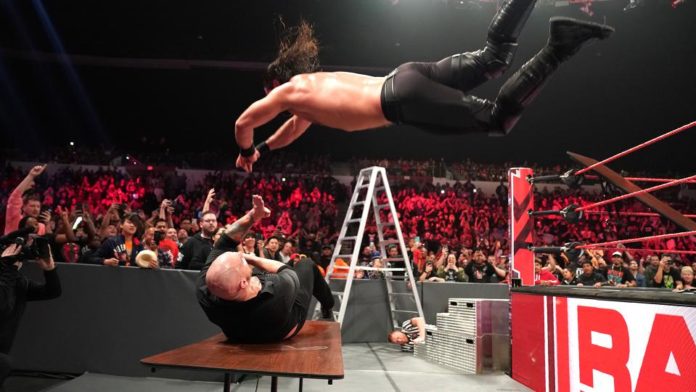 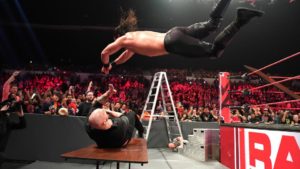 The last episode of RAW en-route to TLC kicked off with the Intercontinental Champion Seth Rollins addressing General Manager Baron Corbin’s poor management and decision making. The Kingslayer later challenged the Lone Wolf to a TLC match, to which the GM-elect accepted but instead made Rollins put his title on the line in the main event.

The match was basically dominated by the trio of Akam, Razar and Drake Maverick from the outset.

AOP looked to have wrapped up the win after hitting the super collider and a double-team neck breaker, however, Maverick insisted on getting the tag and instead, took the opportunity to mock Bobby Roode but it ended up costing his team as the Glorious One rolled up him for the three count and secured the RAW Tag Team titles.

Drew McIntyre was successfully able to avenge his defeat from last week against former friend and tag team partner Dolph Ziggler. The Showoff had a near fall after hitting the Zig Zag on the Scottish Psychopath and looked to capitalize with the superkick but McIntyre instead turned it into a Claymore kick from out of nowhere for the W.

Natalya vowed to teach Ruby Riott a lesson in respect this Sunday at the TLC PPV and dedicated the match to her late father, Jim ‘The Anvil’ Neidhart.

The leader of the Riott Squad didn’t take long to answer and unveiled a table with an image of ‘The Anvil’ on it and promised to put her opponent through it this coming Sunday so that Natalya and her father could be closer than ever.

In one of the more stranger matches last night, newly appointed referee Heath Slater was clearly left as a scapegoat by GM-elect Baron Corbin. Elias’ powerbomb to Lio Rush brought interference from Bobby Lashley and to everyone’s surprise, Slater didn’t end the match via disqualification.

Alicia Fox’s numbers advantage ringside in the form of Jinder Mahal and The Singh Brothers didn’t sustain for the entirety as Bayley’s new Mixed Match Challenge partner Apollo Crews showed up and evened up the odds. This allowed Bayley to swing the momentum on her side as she delivered the Bayley-to-Belly on Fox for the pinfall.

The action spilt not just inside the ring but on the outside also as Nia Jax and Ronda Rousey squared off ringside ahead of their clash this Sunday for the RAW Women’s Championship at TLC.

Thanks to the assist from Rousey, Ember Moon was able to dodge the outside interference and hit Tamina with the Eclipse to seal an impressive win.

Seth Rollins certainly felt the effects ahead of his showdown against Dean Ambrose this Sunday at the TLC PPV. Baron Corbin took control in the early stages and unloaded on the Intercontinental Champion with some brutal strikes.

Despite being the victim of a vicious assault, Rollins was able to bounce back every time and successfully prevented Corbin from ascending the ladder. The Kingslayer took charge and laid out the RAW GM on a table before delivering an incredible frog splash to send his opponent through the hardwood.

Rollins began climbing to the top until he was obstructed by referee Heath Slater, who caught hold off the ladder and sent the Architect crashing down.

Slater then helped Corbin get back inside but just when the IC title was fingertips away from the Lone Wolf, the Champ emerged back once again from the dead to hit a buckle bomb on his counterpart followed up by the Stomp as Rollins soared high and retained his Intercontinental Championship.