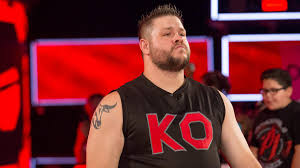 Kevin Owens talked about being thrown off 20 foot ladders and how his pre-match rituals in a recent interview with Argus Leader.

Kevin Owens talked about the spot where he was thrown off the ladder in the WWE Money in the Bank 2018 PPV event by Braun Strowman.

“I don’t know how well it can go when you get thrown off a 20-foot ladder. I’m definitely feeling it; it was an uneasy morning. It’s not part of the risks we take as wrestlers, but stuff like that doesn’t happen every night obviously, but when you got these ladder matches, there’s high stakes, and everybody’s trying to make a name for themselves. Everybody wants to get the MITB contract; that usually means at some point they will become champion. That’s a big deal; that’s what everybody strives for. I’m a professional, and I get used to stuff like that, but I never experienced what I did last night. But I’ll be ready to go before you know it.”

Kurt Angle reveals why he turned down two roles in WWE