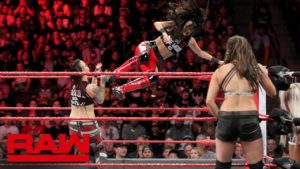 With two weeks left for WWE Super Show Down in Australia, The Riott Squad could face the possibility of being shorthanded for their match against the Bella Twins and Ronda Rousey in Melbourne.

On Monday Night, the Bella Twins teamed up with Natalya to take on the trio of Ruby Riott, Liv Morgan and Sarah Logan. Midway through the match Brie Bella took control and started punishing Morgan with her husband Daniel Bryan’s signature YES Kicks.

However, after a flurry of strikes across the chest, Brie accidentally kicked Morgan on the face and knocked her out. Liv was given medical attention ringside before being taken to the back for further assessment.

The IR list hasn’t been kind to the Riott Squad off-late. Ruby suffered a knee injury a couple of months back while there is yet to be an update provided on Morgan’s injury.

Meanwhile, Brie posted the following message on social media to address the incident:

Every match on #Raw is an opportunity for us to entertain our fans. Our intentions as @WWE Superstars is to win the match, never injure our opponents. Thinking about @YaOnlyLivvOnce tonight. ❤️ -B

Here are the highlights from the six-woman tag team match on Monday Night Raw: