Home Cricket WTC Final Day 5 Review: Draw on the horizon with caution on... 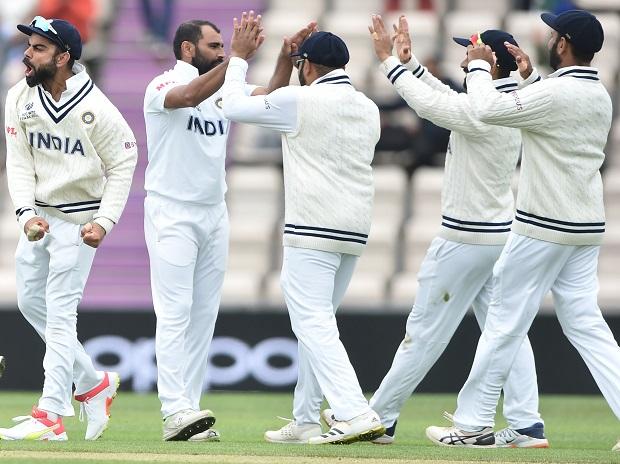 After the weather played spoilsport and washed out the entirety of Day 4 of the World Test Championship final, a full day’s play was on offer on Day 5. India found their rhythm to dismiss the Kiwis for 249, giving them a vital 32 run lead.

The Indian pacers, who operated from a back of a length on Day 3, switched to a fuller length which posed problems for the experienced duo of Kane Williamson and Ross Taylor.

They started the session with utter caution and warded off spells from the pace trio. Mohammad Shami delivered the first blow by dismissing Taylor with a full-pitched outswinger. Shubman Gill grabbed a sharp take at short cover.

India ended the session with two more wickets in the form of Henry Nicholls and BJ Watling. Ishant Sharma got the edge of the former while Mohammad Shami shattered the stumps of the latter with a stunning delivery.

Kane Williamson stood tall and took everything that the Indian pacers had to offer and only put up 7 runs in the entire first session.

Colin de Grandhomme and Kyle Jamieson came out all guns blazing in the second session and chipped in with vital contributions.

The long-term issue of cleaning out the tail remained an issue at this grand occasion as the Blackcaps lower order kept resisting. The skipper’s 177 ball vigil came to an end with one short of a fifty, but Tim Southee’s cameo of 30 pushed New Zealand to one shy of 250.

Mohammad Shami was the pick of the bowlers with figures of 4-76. Ishant Sharma had 3 wickets to show for his tight sets of spells while the spin duo of Jadeja and Ashwin cleaned up the tail. Jasprit Bumrah, bowling 26 overs, had no wickets to his name in the first innings.

Indian openers came out to bat under the elusive sunshine at the Hampshire Bowl in a bid to survive the final session ahead of the final reserve day. Tim Southee, who was not at his best in the first innings, was the main man for the Kiwis as he snapped up Shubman Gill.

The youngster was trapped right in front by the ace seamer for just 8 to put pressure on India. Cheteshwar Pujara and Rohit Sharma battled out for the better part of the next hour to get India safely home and in pole position on Day 6.

However, late into the day’s play, Rohit Sharma was done by an inswinger by Southee and while the impact seemed to be off, it did not matter as The Hitman did not offer a shot to the delivery.

Virat Kohli survived the last bit of the day’s play and walked back with Pujara with the score being 64-2. With a slender lead of 32, India’s mainstays will walk out into the middle and hope to force a result as the forecast promises no interruptions.

WATCH: MS Dhoni and daughter, Ziva shares a picturesque view of the mountains