Once again the nation is gripped in fear after the brutal attack on Priyanka  Reddy and wrestling champion Sushil Kumar has something to say about the heinous crime,“ Whatever happened to the Hyderabad victim is brutal, and the accused should be punished. I’m saddened by the incident and want authorities to take strict action.” 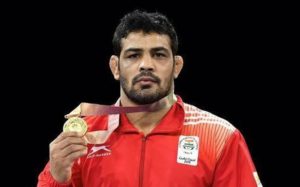 The victim was returning home when her bike’s tires were punctured, and she was raped. The criminals burnt her alive to destroy the evidence. Later her charred body was found at Shadnagar on Thursday.He also added how everyone in the society should join hands to keep the perpetrators from committing such brutalities.

“There is a need for change in the mindset of society. The laws are getting strict day by day. Society has to be helpful and aware to curb these incidents.”

The Olympic medalist also gave his two cents about the implementation of Sports Code in India.  He opined how implementing sports code in China helped them expand their potential and give tough competition to the sports giants, Russia and the USA. He believes the same can be done for promoting sports in India.

An expert committee was appointed by the Ministry for Youth Affairs and Sports to review the National Sports Code.