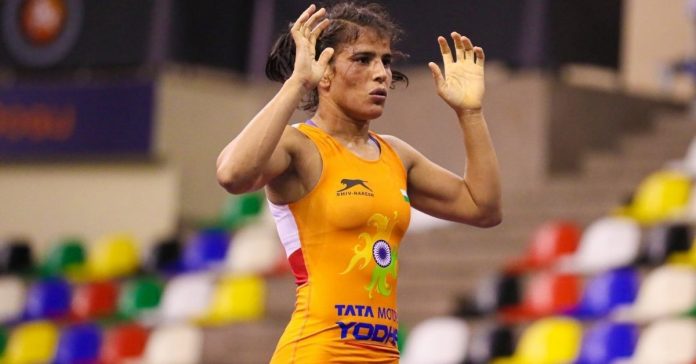 Seema Bisla is just one win away from earning her maiden Olympics quota after the Indian wrestler made it to the semi finals of the ongoing World Olympic Qualifiers in Sofia, Bulgaria on Friday.

In the 50kg quarterfinal event, Asian Championship bronze medallist Seema dominated Anastasiya Yanotava of Belarus, clocking four points in both periods to finish with a clean 8-0 victory. Her next clash will be against Polish wrestler Anna Lukasiak in the semis and a win will get her to the final as well as earn her an Olympics spot.

Despite her overpowering of Yanotava in the quarterfinals, Seems showed a more dominant performance against Emma Jonna Denise Malmgren in her previous bout. Leading the fight by 10-2, she pinned the Swedish wrestler with 43 seconds to go on the clock.

On the other hand, things weren’t so smooth for Seema’s fellow grapplers Nisha and Pooja as they both crashed out of the qualifiers on Friday, ending their road to securing a quota for Tokyo.

Competing in the 68kg category, Nisha locked horns against local superstar Mimi Hristova in the quarterfinals after defeating Natalia Iwona Strzalka previously. Failing to break her opponent’s defense, Nisha suffered a four point throw by the dominating Hristova who won the fight via technical superiority. Pooja, who appeared in the 76kg opening event, suffered a defeat against Kamile Gaucaite, the Lithuanian who edged out with a 4-3 win.

Seems Bisla one step away from joining Vinesh, Anshu and Sonam for the Olympics

So far, three women wrestlers from India have booked their tickets to Tokyo, Vinesh Phogat (53kg), Anshu Malik (57kg) and Sonam Malik (62kg). A win over Lukasiak up next will make Seema the fourth to join the women wrestler contingent of her country destined for the Japanese capital.

In the men’s freestyle categories, Sumit Malik earned his qualification in the 125kg event on Thursday and will go head on against 2018 Youth Olympic champion Sergei Kozyrev of Russia for gold.

However, Greco Roman wrestler Naveen Kumar (130kg), who travelled to the Bulgarian capital along with the rest of the Indian team has tested positive for COVID-19.

“Naveen has been isolated from the rest of the squad. He was the only member to test positive for COVID. Other members of the Indian wrestling squad are safe,” an official spokesperson of Wrestling Federation of India (WFI) said on Friday.