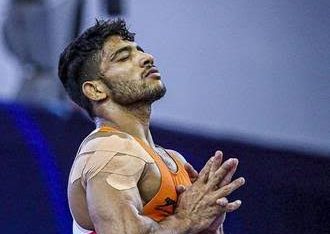 Ravinder Kumar was the only hope for India as he made it to the quarterfinals in the World Championships but his campaign was cut short after he was outclassed by American wrestler Daton Duain Fix in the 61kg category. His loss was a tragedy for the nation but he made his mark as he outperformed two other formidable opponents in the 3 61kg bouts. His first match was against, Korea’s Kim Sunggwon. It did not take Ravinder much effort to outperform Kim. Next up was defending champion, Beka Lomtadze. Beka was out of steam by the time, and it worked as an advantage for Ravinder. He could not win the third bout against Daton, Unfortunately.

Daton took Ravinder by surprise as his moves came flying in before he could react. Daton was too quick and he ended the game within just 2 minutes.

During his bout against Beka, the Indian was leading by two push-out points. Few minutes in and a point was deducted because he stepped out of the ring. He did not take long to take the lead again after executing a take-down move that stunned the Georgian. By this time, Beka was clearly out of breath as the referee was seen warning him for taking too long to stand up.

India had not put all its hopes in one basket. Apart from Ravinder, there were three other wrestlers who had participated in the qualification rounds at the World Championships – Yash Tunir (74kg), Sandeep Mann (86kg) and Anirudh (129kg). None of them could qualify and had to make an early exit leaving only Ravinder.

Yash could not get any punches as he faced Russia’s Timur Bizhoev in the ring. He lost the match by 0-7. Mann, the national champion displayed a better performance as was expected from him. He went down fighting against Korean Kim Gwanuk 4-5. The match was neck to neck but he lost out by a single point. Anirudh’s bout against Egypt’s Hemida Youssif was not one to write home about. He had an embarrassing defeat at the hands of the Egyptian. He lost 3-9.

Ravinder had previously finished silver at the Junior World Championship that was held in August.