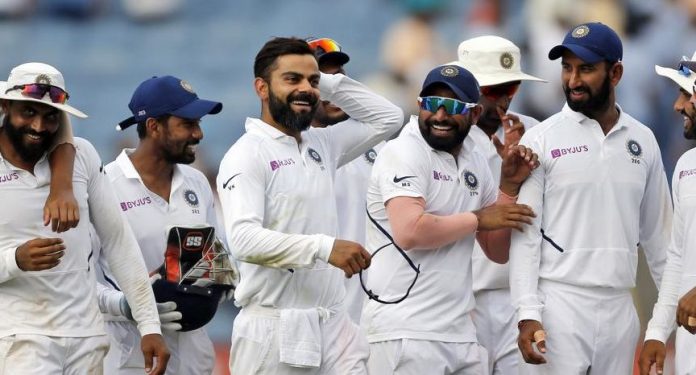 Kane Williamson-led New Zealand on Tuesday became the first team to qualify for the finals of the ICC World Test Championship to be played at Lord’s later this year. This means that only one spot remains for the others in contention, which is most likely to be India and England. Australia, on the other hand, also have a slender chance but their fate will completely depend on the outcome of the India-England series.

Owing to their loss in the prestigious Border-Gavaskar Trophy to India, Australia’s hopes of reaching the finals of WTC were as it is dented and now after their pullout from the South Africa series-only a miracle can see them qualify for the finals.

The WTC final is scheduled to be held from June 18 at the Lord’s.

As a result of several series cancellations owing to the Covid-19 pandemic, the parameter to reach the final would be decided on PTC, which is percentage points instead of absolute points.

Here is a look at the permutations with England, India and Australia still in contention to face New Zealand in this summer’s World Test Championship Final.

India are riding high on a wave of euphoria after completing a historic series triumph over Australia. Given their win in two Tests down under, they hold an advantage in the race to make the World Test Championship finals. Virat Kohli, who missed the Australian tour after the Adelaide Test- will return at the helm of the team to take on England in a four-Test series. If Kohli and his boys defeat England 2-0, 2-1, 3-0, 3-1, or 4-0, then they will lock horns with New Zealand in the summit clash.

As of now, India has the highest percentage points 71.7 while New Zealand has 70 while Australia are third at 69.2 and England are currently placed fourth with 65.2 points.

India need a minimum of 70 points from the series against England which they will get if they win by a margin of 2-1 or more.

Regardless of the nature of the pitch at the Chepauk-the venue for the first two Tests against England, India is expected to go with three spin bowlers as has been the norm during a home series. It is very seldom that one expects a ‘drawn Test’ in India, and a result-oriented series means one will expect India to make it to the finals of WTC by the end of this month. Of late, Virat Kohli’s captaincy has come under the scanner- and a positive result in the race to make it to the finals will be a catalyst to Virat Kohli the captain.

If Australia hadn't been docked four points for a slow over-rate in the Boxing Day Test against India, they would be above New Zealand in the World Test Championship table 👀 pic.twitter.com/0BSgad8xSi

Joe Root will reach a landmark of playing 100 Tests for England during the series in India. England need to reach another landmark of winning three out of four Tests to make it to the finals of World Test Championship, It is easier said than done, and the Poms will have their task cut out against the mighty Indians. England need 87 points from these four Tests to go past Australia, and the history is firmly stacked against them here. The English team gave themselves a fighting chance of making it to the final on home turf by beating Sri Lanka 2-0 away from home. But their ultimate test would come in India, where India have not lost a home series since 2012.

The postponing of the South Africa tour has put Australia’s chance of qualification in jeopardy. They would’ve dearly loved to win a Test series in South Africa and shrug off the bitter memories from the last tour, where they were embroiled in the ‘sandpapergate’ saga. As a result of them opting out of the South Africa tour, the Aussies are stuck on a PCT of 69.2% and will depend on the India vs England series ending in a 0-0, 1-1 or 2-2 draw to progress into the finals as the second-placed team on the table. Such an exciting climax at the fag end of the World Test Championship is a testament to the fact that Test Cricket is here to stay!