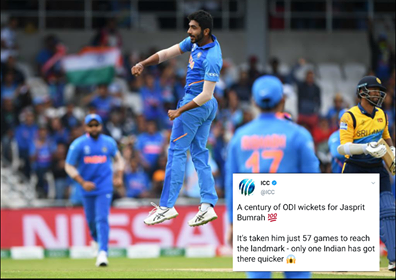 In the game against Sri Lanka, Jasprit Bumrah dismissed the Sri Lankan skipper Dimuth Karunaratne in the fourth over. This was Bumrah’s 100th wicket in ODIs. With 100 wickets in 57 ODI matches make Bumrah the second fastest Indian to do so. World no.1 bowler in ODIs took just one more match than Mohammed Shami to reach this feat.

Afghanistan’s Rashid Khan, however, did it in just 44 games.

Bumrah had first come under the limelight when he made his debut for Mumbai Indians. But, he was not taken very seriously because of his weird bowling action.

Bumrah, however, kept performing for the Mumbai Indians to earn his first national call in 2016. Since then, Bumrah has been the pillar of the Indian bowling line-up in all three formats of the game.

In the current World Cup, Bumrah has already taken 17 wickets in 8 games. In today’s game, Bumrah took a total of 3 wickets. His best figures in the World Cup came in the previous match against Bangladesh where he took 4 wickets for just 55 runs in his 10 overs.