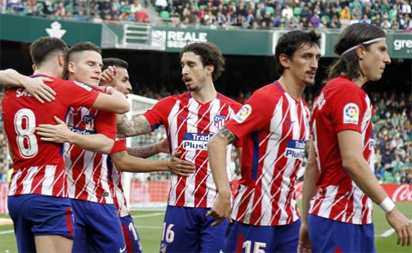 The 2018 World Cup final was unlike almost any other. There were six goals for the first time since 1966 and while champions France logically raced to Paris with the trophy in tow, Croatia were just as warmly welcomed back in Zagreb, having massively exceeded expectations.

In total, there were 11 LaLiga players celebrating their summer achievements the following morning, and LaLiga should relish the prospect of these players carrying their positive momentum into the 2018/19 domestic season.

Lucas Hernandez (Atletico Madrid): Atleti will be especially happy with the 22-year-old’s performances. Lucas began last season as Los Rojiblancos’ backup centre-back but played so well as a left-back following an injury to Filipe Luis that he was called up to Didier Deschamps’ France squad. In Russia, he picked up two assists, including one in the final, which will have made Diego Simeone gush with pride.

Sime Vrsaljko (Atletico Madrid): Lucas was included in many fans’ and publications’ ‘XI of the tournament’, but so was his Croatian teammate Vrsaljko. The right-back was influential in both defence and attack for his country, laying on an assist in an ever-present campaign.

Antoine Griezmann (Atletico Madrid): Atleti will also be pleased that Griezmann, who has pledged his future to the club, was a key factor in France’s attack. As well as his four goals and an MVP award in the final, he demonstrated the kind of defensive commitment that those at the Wanda Metropolitano love to see.

Thomas Lemar (Atletico Madrid): The Frenchman, who signed for Atleti from Monaco just before the tournament, was named on the bench in the final having previously featured against Denmark in the group stages. With Lemar joining Griezmann and Diego Costa in Simeone’s impressive attacking line, Atleti fans are in for a treat this season.

Samuel Umtiti (FC Barcelona): The Frenchman’s defensive solidity was a real highlight but he also pitched in with a key goal, the only goal of the game in the semi-final vs Belgium. ‘Samu’ signed a new contract this summer, ensuring that Barça can count on his quality as they look to defend their LaLiga Santander title this season.

Ousmane Dembele (FC Barcelona): While not a starter in Russia, 21-year-old Dembele made an impact for the champions from the bench and his World Cup experience should help him further develop as he looks to breakout at the Camp Nou this season.

Ivan Rakitic (FC Barcelona):  One of Zlatko Dalić’s team’s most influential players. The 30-year-old showed last season that he can play in a variety of positions and further demonstrated his versatility in Russia, which will delight Barça coach Ernesto Valverde as he looks to consolidate his midfield following the departures of Andres Iniesta and Paulinho.

Luka Modric (Real Madrid): The standout performer of the tournament and winner of the Golden Ball for the best player at Russia 2018.  There is talk of him winning the 2018 Ballon d’Or and a strong start to the 2018/19 LaLiga campaign for Real Madrid will strengthen his case.

Mateo Kovačić (Real Madrid): Modric’s teammate for club and country was an important part of Croatia’s run to the final, playing in the first five matches and helping his team to close out their victories. The 24-year-old is going into his fourth season as a Real Madrid player and will be keen to impress new coach Julen Lopetegui.

Raphael Varane (Real Madrid): Real Madrid’s representative on the winning France team added the World Cup to his honours list, which already includes four Champions Leagues, three Club World Cups, three UEFA Super Cups, two LaLiga titles, two Spanish Super Cups and a Copa del Rey… and he’s still only 25! Already one of the most decorated players in world football, he could finish his career with more medals than anyone in history, the prospect of which should see him attack the start of the 2018/19 LaLiga season with the same hunger as always.

Steven Nzonzi (Sevilla FC): The sole Sevilla player to get his hands on the World Cup after coming on in the second half of the final to help Les Bleus close out the match and to stave off the Croatian fightback. He’ll return with sky-high confidence as Sevilla look to improve on their seventh-place finish last season in Pablo Machin’s first season at the helm.