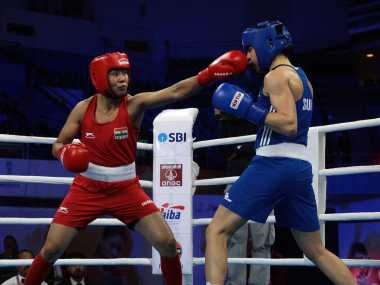 India embarked their campaign in the 2018 AIBA World Women’s Boxing Champions at the KD Jadhav Indoor Stadium in New Delhi with a bang as Sarita Devia and Manisha Maun marched on to victory in the 54kg and 60kg weight category respectively.

“I am very proud for winning my first bout in the World Championships. I have proved that I can be at this stage. I will give my best and see how far I can go. I am confident of doing well in the coming rounds,” said the 20-year-old Manisha Maun after her victory.

Sarita Devi explained her strategy in the game which got her the W. “In the first round I was trying to observe her and find out how to go about in the next two rounds. But she came attacking from the first round itself. I was finding it difficult to control her. Under the new points system, you need to have a proper guard and combination of punches to fetch points. That was what I was doing. She got a standing count in the second round and in the third round I was trying to attack.”

Tomorrow, India’s Sonia Lather would take on Morocco’s Toujani Doaa at the featherweight category in the afternoon. Meanwhile, Simranjit Kaur would be in action against USA’s Amelia Moor at the light welterweight category and Pinki Rani would cross swords with Armenia’s Anush Gregoryan at the flyweight category later in the evening.