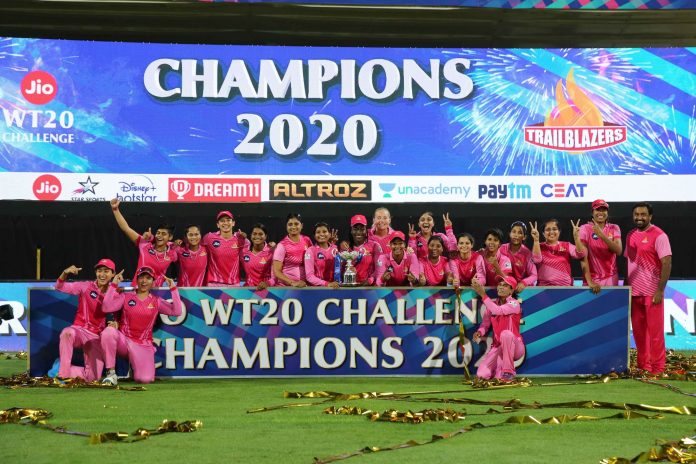 Trailblazers successfully restricted Supernovas within a below-par while defending a total of 118 on the back of a brilliant bowling show and beat the two-time champions Supernovas by 16 runs and win their maiden Women’s T20 Challenge trophy on Monday.

However, the game was a low-scoring clash owing to a slow surface and only Trailblazers captain Smriti Mandhana (68 off 49) could manage to score a fifty. Apart from her, both the side struggled to open their arms after Harmanpreet Kaur chose to field first, winning the toss.

Put into bat, Smriti Mandhana was in full form and started taking on the bowlers since the beginning. While her opening partner Deandra Dottin was not in a good form, Mandhana’s onslaught helped Trailblazers put up 71 in 11 overs without losing a wicket. While Smriti was finding boundaries quite easily, Dottin’s struggling knock (20 off 32) came to an end after Poonam Yadav removed her.

Mandhana also brought up her fifty and her free-flowing batting gave the hope of a big total around 150-plus but Supernovas bowlers’ collective effort restricted the run-flow and to speed things up, Trailblazers lost a few wickets in between.

Mandhana got stumped off the experienced Shashikala Siriwardene in the 15th over and after that, Trailblazers couldn’t recover, courtesy Radha Yadav. She dismantled the batting order with two wickets earlier and three wickets in the 20th over and finished with the figures of five for 16 in her four overs spell.

While chasing, the responsibility was on dangerous Chamari Athapaththu, who alone can turn the table. But Sophie Ecclestone trapped the in-form Chamari Atapattu (6)before the stumps in her first over and Deepti Sharma (2/9) dismissed Taniya Bhatia (14) caught at mid-wicket left Supernovas reduced to 30 for two inside the seven overs.

The onus fell upon Jemimah Rodrigues (13) and the captain Harmanpreet Kaur (30 off 36). They started to resurrect the chase but a brilliant catch at cover point by Thailand player Nattakan Chantam sent Jemimah in the dug-out. Siriwardene did try her best with an 18-ball 19 alongside Kaur, they failed to get going as Harmanpreet was also struggling with her fitness and later fell for 30.