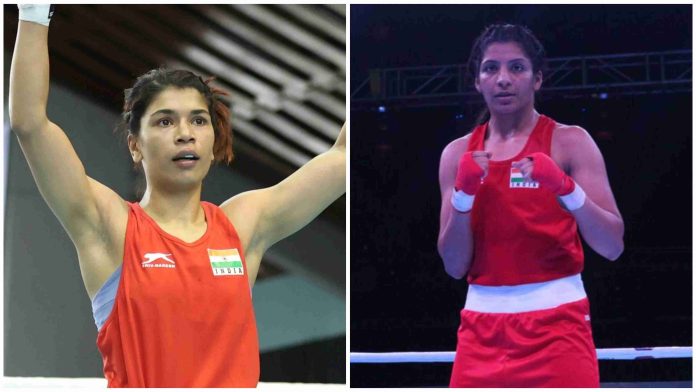 In her round-of-32 bout, Nikhat of Telangana went up against LK Abinaya of Tamil Nadu without breaking a sweat. A fierce start to the bout was followed by several punches landed by her, and as a result, the referee stopped the fight (RSC) in round one. Nikhat’s next contest will be against Eva Marbaniang of Meghalaya in the pre-quarterfinals on Thursday.

Simranjit, who hails from Punjab, was at her best offensive mode in her round-of-32 operating against Ladakh’s Nilzaya Angmo. As much as Nilzaya tried, she couldn’t escape the heavy blows she faced from her opponent.

The referee stopped the contest at the end of the first round, marking Simran’s entry into the second round. Her pre-quarterfinal opponent will be Pooja Behra of Jharkhand.

In a one-sided contest, Manju Rani of Maharashtra blanked Priyanka Shirsale of the World Championships 2019 in 48 kg. The 2019 Worlds silver medallist Manju, a member of the Railway team, consistently picked punches throughout the three rounds. A round-of-16 bout is scheduled between her and Kavita of Uttarakhand.

Saweety Boora (81kg), the 2022 Asian Championships gold medalist, defeated Marthamaa Sattivada 5-0 and will face Chandan Choudhary from Rajasthan up next in the pre-quarterfinals tomorrow.

Assam’s Lovlina Borgohain (75kg), the bronze medalist at the Tokyo Olympics, was given a bye in the first round of the tournament. Her next outing will be against Nayak of Odisha in the round-of-16 bout on Friday.