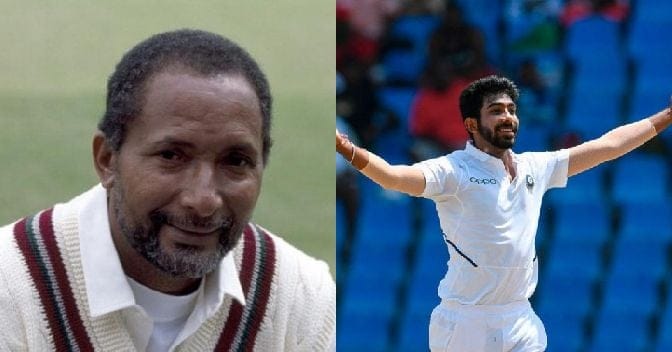 As India decimated the Windies on Sunday to earn themselves a 318-run victory, former Windies fast bowler Andy Roberts who was once a part of the four most fierce bowlers was impressed by Jasprit Bumrah’s bowling in the second innings of the game. 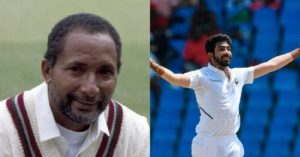 The spearhead of the Indian attack took five wickets in the second innings and helped the Indian team win the game comfortably. Not many noticed but the Ahmedabad-born pacer was bowling from the Andy Roberts end and the former fast bowler was himself present in the stands to watch the bowling master-class by the Indian , the 68-year old Roberts was in praises after Kraigg Braithwaite’s wicket and Bumrah also received a nod from the Veteran “Perfect length. You can’t get better than his. The chap is very good. He is hitting the right areas straightaway. Not too many do that…”

He also praised the Indian after he broke John Campbell’s front-foot defense and bowled him with a perfect inswinger. He was reminded of Michael Holding and Malcolm Marshall who were the part of the fantastic four in the 1970’s and 80’s,“That’s a brute. You can’t do anything against. Just bad luck. Was the kind of ball Michael (Holding) used to bowl back in our days. And later Malcolm Marshall. This is a serious ball and can get the best batsmen out,” said Andy Roberts.

The fans at North Sound were also impressed with Jasprit Bumrah’s bowling as the fans were urging him to take a wicket every now and then and the DJ was playing a retro Hindi song to motivate the fast bowler,