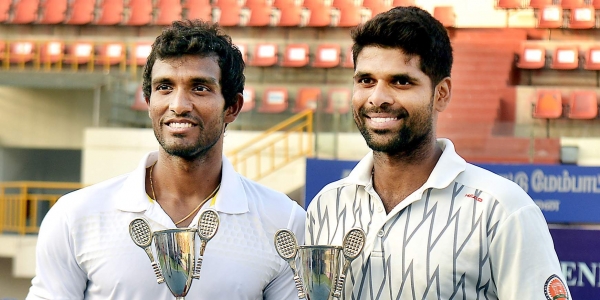 Yesterday was a good day for Indians at the Wimbledon 2018 in London.

Indian pair, Sriram Balaji and Vishnu Vardhan who made their Wimbledon debut, beat Marcus Daniell and Wesley Koolhof in the first round of Men’s doubles in London today 7-6,6-4,7-6 in straight sets. Now they will face Ben Mclachlan from Japan and Jan-Lennard Struff from Germany in the Round of 32.

After that, India’s Divij Sharan and his partner from New Zealand, Artem Sitak made a winning start at the Wimbledon championships as they won over Radu Albot and Malek Jaziri in London on Thursday. Sharan and Sitak eked out a 7-6(4) 6-7(8) 6-3 6-2 win in two hours and 41 minutes to book a second-round berth.

Again, Rohan Bopanna and France’s Edouard Roger-Vasselin defeated the pair of Alex de Minaur and John Millman 6-2, 6-2, 6-4 in an hour and 29 minutes. They did not face a single break point on their serve.

Can be said that Indians are pretty much on a roll at the Wimbledon!

Read which Indian cricketer tore up his Speed Post job to pursue his cricketing dreams!

Wasteful chelsea win 1-0; it could easily have been 5