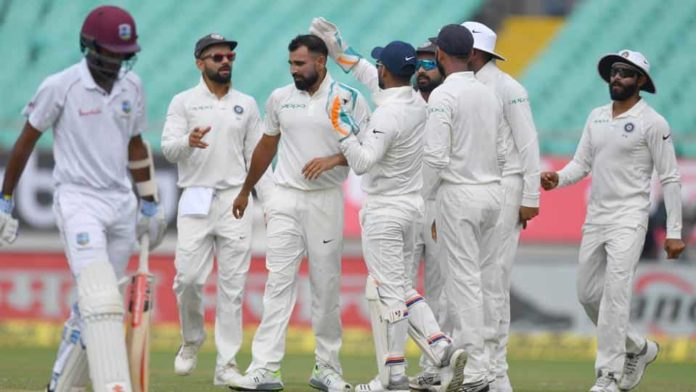 Day 2 marked a typical day of test cricket for India, as the hosts piled more misery to a weak West Indies side who looked completely out of sorts.

Captain Kohli and Jadeja reached their respective centuries while Rishabh Pant shined with a blazing knock of 92 to declare India’s innings at 649-9. Stumps saw West Indies reeling at 94-6, after Shami along with the spinners wrecked havoc. 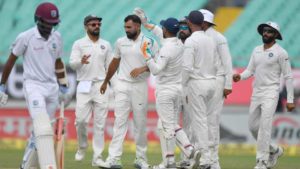 Continuing from where they left off on the previous day, Virat Kohli and Rishabh Pant scored at a brisk pace to put a firm grip on the game. In the process, Virat reached his 24th test ton and once again crossed the 1000 run landmark in tests for the 3rd year running.

At lunch, India stood at 506-5 after they had lost Rishabh Pant late in the session on 92, who missed out a deserving century. Post lunch saw the hosts lose Kohli and Ashwin in quick successions. Jadeja then stitched crucial partnerships with the late order to reach his maiden century following which the declaration came in.

West Indies who then came out to bat, potentially needing to play out of their skins to save the game, got off to the worst possible start. Shami removed both the openers, Brathwaite and Powell in a matter of 5 balls to leave them in a fix.

The visitors couldn’t get their score moving along as they kept losing wickets in regular intervals as Jadeja produced a super all round performance on the field. At 94-6, West Indies headed to stumps on day 2 clearly knowing that they need a miracle to save the game.

India on the other hand will look to enforce the follow-on tomorrow and take steps to wrap up the game in clinical precision.

India beats Bangladesh in yet another close Asia Cup encounter, but it’s the U-19s this time