And amidst the glitz and glamour and the chaos, an IPL encounter is often decided by the barest of margins or a split-second decision or an individual brilliance.

The process over the 4o overs of cricket is accelerated by the evolution of strategy, tactics and technique in all cricket, and the source of much of this evolution can be traced back to statistical data analysis.

Simply put, a cricket match a battle between a bat and ball, well no more just that. Fielding is often the mantra for success these days. It’s an aspect that makes a crucial difference on occasions, separating the winner from the loser.

Fielding and fitness play a massive role in T20 cricket. The opening two fixtures of IPL 2020 were indicative enough to suggest most of the players are still feeling the inevitable rust that sets in because of the long gap from the game.

The standards of ground-fielding in these two matches was not only painful to watch, but it also played a big part in the outcome of the matches. 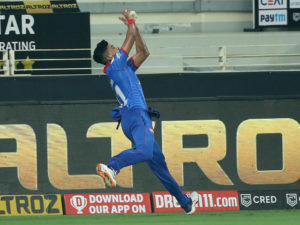 During the Chennai Super Kings’ innings, there were some misfields by the Mumbai Indians but in the 9th over, a game-defining moment happened. Krunal Pandya was the bowler and Rayudu played an uppish flick to the leg side but Rahul Chahar dropped the catch. Rayudu smashed his 19th fifty to boost Chennai Super Kings towards victory.

Since their readmission to the IPL in 2018 after serving out a two-year ban, CSK resorted to creating a team around players who are well above 30.

Barring a few hiccups, Chennai Super Kings were simply magnificent in the field, with Faf du Plessis pulling off two spectacular catches off Hardik Pandya and Tiwary in the same over bowled by Ravindra Jadeja.

CSK’s management and coaching team deserve to take a lot of credit for their resurgence of sorts. They were criticised for picking old players, but the likes of Dwayne Bravo, Dhoni and Shane Watson have delivered. Despite missing a livewire in the field in form of Suresh Raina, the Super Kings stuck to their guns and fielded admirably, despite the limited training stints.
A run saved is as good as a run scored. Many matches are won because of splendid fielding and brilliant catching. A familiar adage in cricket is “catches win matches”.

Cumulatively, in the opening two fixtures-there were as many as 6 chances that went begging and with the high-standards of IPL, teams will need to find a way to figure out the way.

Ever since IPL was moved to UAE, the Emirates Cricket Board (ECB) have been working extensively on the maintenance of the cricket fields at Sharjah, Dubai and Abu Dhabi stadiums. But to be honest, the outfields look heavy, which makes things rather tricky for the fielding side. But that can hardly be used as an excuse by teams, who have trainers and fielding coaches to train the players according to the conditions.

There was another occasion during Sunday’s fixture, where Marcus Stoinis was starting to cut loose. And the Kings XI Punjab outfielders were not quick enough to get to a Stoinis lobbed, miscued top-edged sweep. The DC batsman, lucky to survive reprieves, top-scored with a brisk 53 in his team’s thrilling super-over win.

It is not just someone like a Shami who looks ill-equipped for the job. He bowled his heart-out, scalping three wickets in four overs-but when it came to fielding, his work in the outfield was shoddy. He gifted away runs that Kings XI could ill afford.

The fielding in the IPL 2020 so far has been abysmal for a few understandable reasons. Kings XI Punjab and Mumbai Indians could point at dropped chances for their opening losses. Over the two matches, it seemed like the teams had made a pact to field poorly.

Audacious shot-making, runs piling up at an unthinkable rate, and six-hitting are natural traits in IPL these days. It is about time, sharp fielding joins the club too!