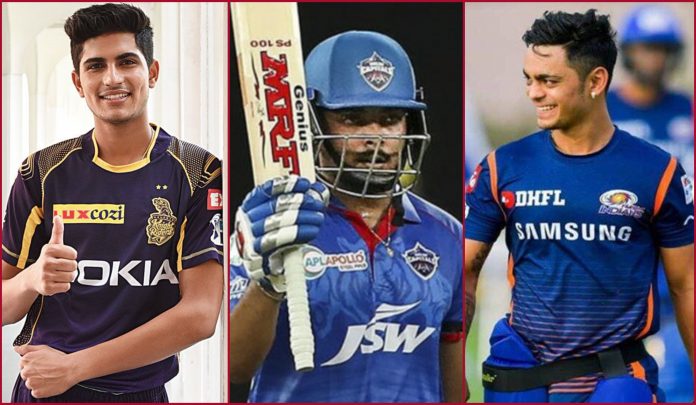 The 13th edition of the Indian Premier League (IPL) is now in full flow with many youngsters making the most of every opportunity given to them by their respective teams.
Considered as the world’s best t20 tournament, the IPL boasts high quality young talented players, resulting in intense competition for spots.

No matter how well budding cricketers do in domestic or age-group cricket, the confidence and experience they gain by rubbing shoulders with established international players expedites their grown at a crucial juncture in their careers.

So let’s take a look which players have the potential to steal the spotlight and which teams have the best young players. A plethora of youngsters have made a huge impact already.
Among these are Prithvi Shaw, Rishabh Pant, Shubhman Gill, Sanju Samson, Ishan Kishan and Shreyas Iyer to name a few. Then there is the other group of under-19 cricketers from the past 2-3 years striving to make the big breakthrough. This includes Shivam Mavi, Kamlesh Nagarkoti, Priyam Garg, Abhishek Sharma, Rahul Chahar, Ravi Bishnoi, Kartik Tyagi, Riyan Parag.

Most of these players have come from the under-19 teams of the past few years, and some of them have already won the India cap.

Indian cricket currently is spoiled with good options when it comes to batsmen. From Shubman Gill to Prithvi Shaw, Devdutt Padikkal, Sanju Samson, etc. But, which team has the best of the lot?

Given the pandemic, all eight IPL teams have not had the normal preparation that they go through as a pre-tournament routine to strategise, plan and evaluate the squad. But that has hardly deterred the young talented players from making the most of the available opportunities to make a mark. In the normal course, they also spend time in identifying players useful for conditions known to them at the various venues in India.

Alongwith Shaw, Yashaswi Jaiswal is another youngster in the spotlight. He is the youngest player to be participating this season and is a known figure in the country as he made ripples with his performances at the U-19 World Cup this year and ended the tournament as highest scorer having scored 400 runs in just 6 matches at an incredible average of over 133. He was also awarded man of the series trophy for his outstanding performance in the tournament.

All these young dynamites, along with the seasoned domestic performers and India’s international stars, have brought a rainbow of joy to Indian cricket. One can envy the task of the new selection committee under Sunil Joshi, who very shortly will have to select the team for the T20Is, ODI, and the Test teams play Australia in November.

The value of Under-19 cricket has been significant from the turn of the millennium, when youngsters like Yuvraj Singh, Mohammed Kaif and Irfan Pathan burst on the national consciousness by winning the Under-19 World Cup.

Since then, the national under-19 World Cup teams have been the most important feeder line to the Indian team. Virtually the who’s who of Indian cricket in the last 15-20 years has come through this route, Rohit Sharma, Ajikya Rahane, Virat Kohli, Kuldeep Yadav and Ravinder Jadeja being the most prominent among several.

What would otherwise have taken a few years of grunt work in domestic cricket can now be achieved in one productive season, which can fast-track a player into the national team.
While the IPL offers a huge bounty to players and is also a terrific platform to exhibit talent, it is a highly competitive environment demanding discipline, dedication, intelligence and commitment. Lots of players get instant fame, but only the fittest survive.

A good headache for Ponting, who could chip and change it’s playing 11 depending upon opposition and wickets. After taking up the captaincy for DC mid-season during IPL 2018, Shreyas Iyer has since marched his troops successfully in IPL, which has promoted him to a regular in Indian cricket team now.

Performances in the league have, over the years, had an influence over selection matters as far as national teams are concerned. The likes of Jasprit Bumrah, Yuzvendra Chahal, Hardik Pandya, etc. were relatively unknown names before they made it big in the IPL, which helped fast-track their transition into Team India. A lot of young Turks get instant fame with the IPL, but only the fittest will survive.