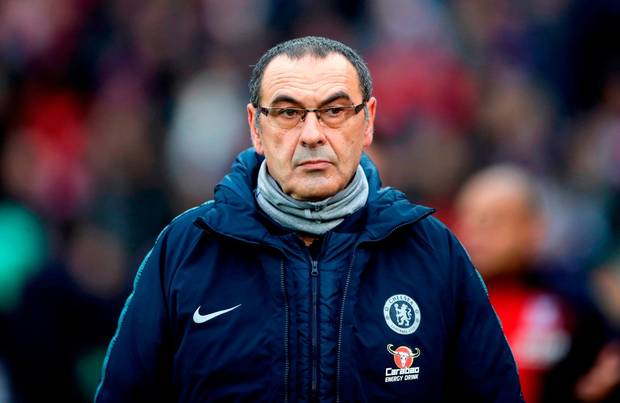 Chelsea coach slammed the VAR system in yesterday’s EFL Cup match Tottenham beat Chelsea all thanks to a Harry Kane penalty goal which he scored at the 26th minute.

At 24 minutes into the game, Kane was charging into Chelsea’s penalty area. He was about to net the ball but a lunge from keeper Arrizabalaga threw him off balance. The referee called for a VAR because he thought Kane might have been offside. However, the VAR rewarded the penalty to Tottenham and Kane made quick work of it.

However, Chelsea gaffer Maurizio Sarri was not particularly satisfied with the decision. He declared the introduction of VAR in his native Italy to have been a “disaster”.

“I saw a few minutes ago a video from our camera, it was offside. Offside. Our camera was in line with Kane but it’s not important. It was important they stop the run, he had a big influence over our defenders. I think English referees are not able to use the system”, he said.

“If you are not sure with the system you have to follow the ball and then decide but in this case, he stopped, didn’t follow the ball and so for our defenders he was offside. I dunno about the goalkeeper but for sure about the defenders but it’s not important, they have to study the system because also in Italy the first period it was difficult to understand. It’s strange in Premier League it isn’t but in Carabao cup is the system.”

Maurizio Sarri brings out Chelsea's analysis footage of the game on a laptop to prove @HKane was offside 👀 pic.twitter.com/W4ZSj3o27r

Pep Guardiola outlines what Man City need to do to win...

Ashley Young swears at his team-mates during training