Wayne Rooney , a born Evertonian has played for two of the country’s most respected clubs – Everton and Manchester United. Incidentally, the rivals of both of Wayne Rooney’s past teams are in the running this season for the Premier League title. 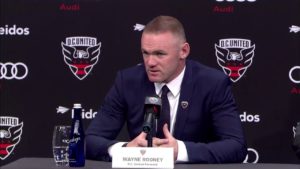 The legendary English striker believes it’s a good time to be playing in the MLS especially when his rival teams are at the top of the English football charts. Rooney had some snazzy things to say about Liverpool and thir fans.

“It’s a great reason to be out the country when those two are going head-to-head for the title,” Rooney, who now plays for Major League Soccer side DC United, told talkSPORT.

“I hope Man City get over the line before Liverpool. I couldn’t bear to see them win it, it would be a nightmare for any Evertonian.

“I remember in 2005 (Liverpool) won the Champions League and they’re still talking about it now so it would be another 10 or 15 years of that.”

Well, whether you’re Wayne Rooney or any other individual, dont shy away from the fact that you atleast once have resented Liverpool’s challenge for the title.