Virgil van Dijk – the Player of the Year in English Premier League and the favourite to win the coming Ballon d’Or trophy is renowned for his defensive prowess. Superb tackling, unmatched marking and dominance in the air make him one of the most feared defenders on the planet. Surprisingly, there has been a revelation about his pace that even puts Rio Ferdinand to shame! 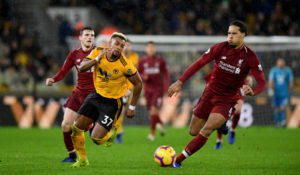 Van Dijk clocked a speed of 34.5 km/h during Liverpool’s 3-0 defeat to Barcelona in the semi-finals.

The sprint where VVD reached 34.5 km/h (highest in the UCL this season) plus Robbo just being Robbo pic.twitter.com/nOn72nySeN

It came in second-half injury-time with Liverpool already 3-0 down. Lionel Messi was breaking with the ball and had Jordi Alba and Luis Suarez either side of him.

VVD sprinted through the middle to make a 1v3 situation into a 2v2 thus preventing Barca scoring a 4th. The rest is history.