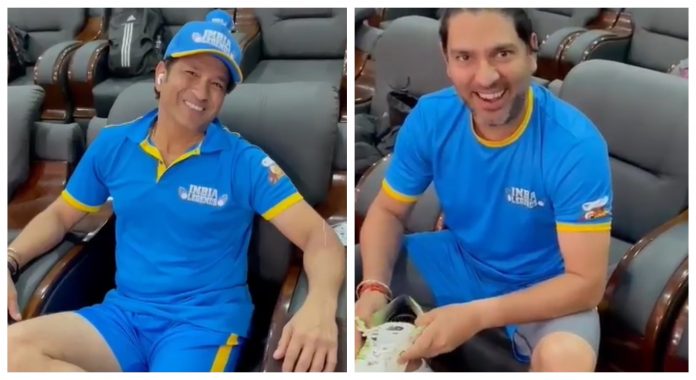 Batting legend Sachin Tendulkar still holds the same place in fans’ hearts. While he is currently playing in the Road Safety World Series, fans still turned out to the stadium to watch their ‘God’ in action. However, not only fans but his teammates too consider him that as well which also included former India’s swashbuckling opener Virender Sehwag who also idolizes Tendulkar.

However, the duo has opened for India in several matches in their playing days, and have given a lot of memories that will stay for a lifetime to the fans as well. And now, Sehwag took to Instagram and has shared a video of his ‘God’.

In the video, Tendulkar can be seen taking an injection and getting ready for the match of the ongoing series. Sehwag calls Sachin Tendulkar God and states that the ‘Master Blaster’ has taken a couple of injections and is getting ready for the game as well. The physio could also be seen in the video, and he also says that Tendulkar is still fit and is practising seriously for the match. Along with them, there was Yuvraj Singh too who shares his one-liner as well.

See the video below:

However, fans got to see their favourite opening pair – Virender Sehwag and Sachin Tendulkar once again in the Road Safety World Series against the Bangladesh Legends at Raipur in their own form. The Bangladesh Legends batted first and posted a chasable total of 109 runs on the board.

In reply, Tendulkar and Sehwag showed their form and took on every bowler of the opposition. The two batting legends put on an undefeated partnership of 114 runs for the first wicket and helped the India Legends side reach the target in just 10.1 overs as well.

While Sehwag scored a swashbuckling 35 ball 80*, Sachin Tendulkar scored a quickfire 33* off 26 deliveries. And, none of the Bangladesh bowlers could restrict them as they went at an economy rate of near 8.50 runs per over.

Notably, Tendulkar and Sehwag are two of the most legendary batsmen in world cricket. While Tendulkar is the highest run-getter in both Tests (15921) and ODIs (18426) and he is also the only batsman in the history of the game to have scored a record 100 international centuries as well. Meanwhile, Sehwag is the only Indian batsman to have scored two triple tons in the longer format of the game.