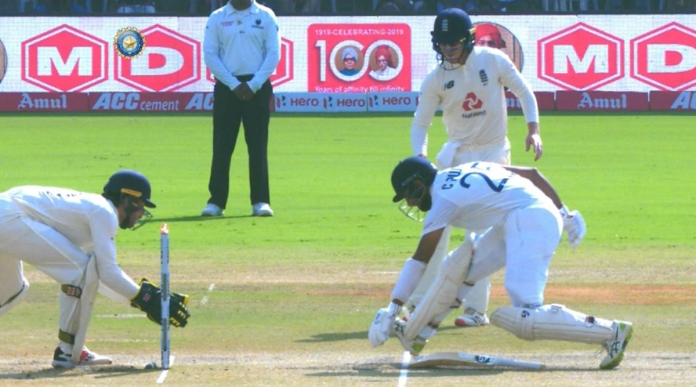 Despite having started on a positive note, Team India lost the way in their second innings as they lost their 6 wickets against England in the second Test in Chennai. While others have a proper dismissal, dependable batsman Cheteshwar Pujara got out in a bizarre manner as he got run out on Day 3.

It happened when Moeen Ali was bowling. Pujara came down the track to defend it and hit it towards Ollie Pope at short leg. Pope showed brilliant reflexes and soon grab the ball and throw it to the wicketkeeper Ben Foakes, who dislodged the bails without wasting a second. Meanwhile, Cheteshwar Pujara, who was really quick to turn around after playing the shot to return to the crease, failed to reach inside the crease as his bat got stuck in the pitch and it fell from his hand as well.

However, Pujara’s foot was a little above the ground when Foakes took off the bails and the veteran batsman had to leave the crease early in the day. Had the bat not fell out of his hand, he would have been playing as well.

Here is the run out:

However, in the first match too, he became the victim of a poor dismissal at the MA Chidambaram Stadium, Pujara got out when a pull shot hit the short leg fielder and it became a catch to the midwicket.

However, a win is needed for Team India to keep the hope alive for the selection in the final of the World Test Championship (WTC) in June. While New Zealand have already qualified for the final, India too will try hard to win the ongoing Test as well.