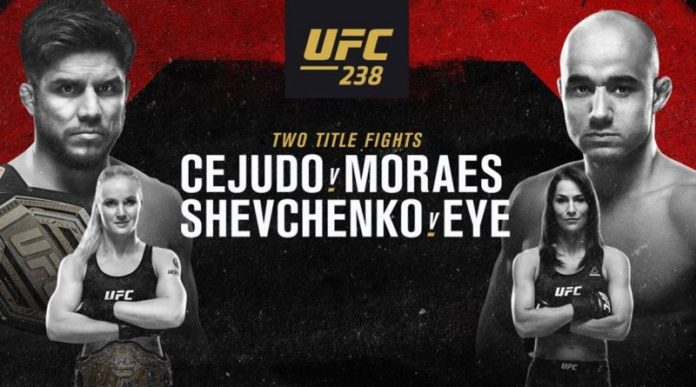 This weekend, UFC 238 will feature a pair of interesting title fights at the United Centre arena in Chicago. Henry Cejudo, the reigning flyweight king will look to secure his second title to become a double champion but will face stiff competition from his counterpart, Marlon Moraes, who has been keen on this opportunity since a long time. The co-main event will feature the flyweight queen, Valentina Shevchenko who will take on Jessica Eye in her first title defence since beating Joanna Jedrzejczyk back in December 2018. UFC 238 will also star former interim lightweight champion, Tony Ferguson, who will take on Donald Cerrone to gain the bragging rights for the title in the lightweight division.

At UFC 238, Henry Cejudo will attempt to capture the vacant UFC Bantamweight Title in a fight against former World Series of Fighting champion Marlon Moraes. Henry ‘The Messenger’ Cejudo comes into this fight as a Flyweight Champion after dispatching the former flyweight champion, TJ Dillashaw in just 32 seconds of the first round at UFC Fight Night 143. The Olympic gold medallist in wrestling has a knack of dethroning the champions since UFC 227 where we saw his career-defining victory against former champion Demetrious Johnson in August 2018. “The Messenger”has won four fights in a row and established dominance each time he gets inside the Octagon. To call himself a “triple champion” with the UFC Bantamweight and UFC Flyweight titles along with his Olympic Champion title, Cejudo will have to beat one of the best fighters in this category when he takes on Marlon Moraes this weekend.

Marlon Moraes comes into this fight on the back of four wins in a row by successfully dispatching top fighters like Raphael Assuncao and Jimmie Rivera amongst others. Marlon “Magic” Moraes has only faced one defeat in the past seven years.  Addressing the media before UFC 238, Marlon said, “We all know matchups make champions and I think Henry Cejudo is a great matchup for me. He beat a legend, Demetrious Johnson and later went on to beat TJ Dillashaw but we did not get to see much of Cejudo in those fights. I think T.J Dillashaw has got what you need to beat Henry. I think it was a fluke. I don’t want any flukes and I’m well prepared for this fight. I’m going out there to win and leave no doubt who’s the best 135-pounder in this division.”

Valentina Shevchenko will defend her title against the streaking Jessica Eye at UFC 238 this weekend. Jessica has earned the right for this title opportunity by winning three consecutive fights and will look to dethrone Valentina in this co-main event.

Valentina Shevchenko debuted in the Flyweight division earlier in 2018 and since then “The Bullet” has been anxiously awaiting her shot at the new UFC women’s flyweight title. Valentina Shevchenko has successfully navigated through the bantamweight division by winning against strong opponents like Holly Holm and Julianna Pena. The multiple-time Muay Thai champion has had one previous fight in the flyweight division when she completely pulverized Priscila Cachoeira in February. She will now face Jessica Eye in her first title defence since claiming the title last year with a victory against former Women’s Strawweight Champion, Joanna Jedrzejczyk in December at UFC 231. Shevchenko is one of the most skilled and decorated fighters in MMA with seven of her eleven wins coming by submission and four by KO/TKO. The Russian has proven to be dominant and ruthless both on-ground and on her feet. Speaking to the media ahead of this historic fight, Valentina said “I’m motivated every time I step inside the Octagon. I’m not here to enjoy or have fun. I’m here to win the fight and keep the belt for a long time, as long a time as I can. For me, this is my motivation for martial arts.”

Jessica Eye has had great moments competing in the Bantamweight division with three consecutive wins over Kalindra Faria, Jessica Rose-Clark and Katlyn Chookagian. In the build up to UFC 238, the 32 year old left her longtime gym at Strong Style Training Center in Cleveland to train at Xtreme Couture in Las Vegas. The experience she will get from her new coaching staff along with her experience within the Octagon will be crucial going into this fight. Addressing the media ahead of UFC 238, Jessica said “I’m not a pushover just because I lost before and everybody once identified me with previous fights that I had. I hope she takes this time on being ready for me as I’m going to be ready for her. If she doesn’t take this time to make herself better, she’ll be surprised in the Octagon. I am ready for her and everyone will surely see the best of me that night.”