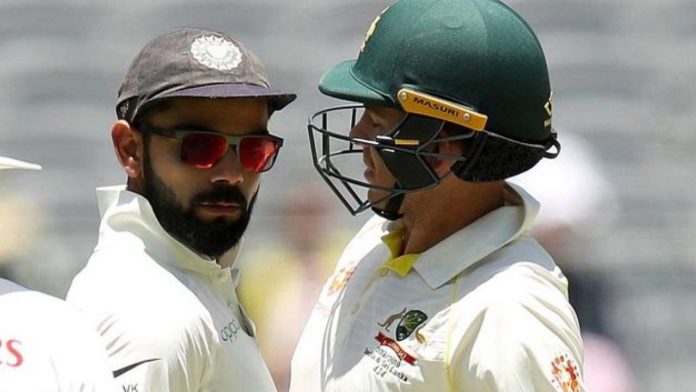 Australian Test skipper Tim Paine took a dig at his Indian counterpart Virat Kohli saying that his team would love to play at the Gabba against India and are only waiting for Kohli’s “permission”. The Aussie wicketkeeper was at his witty best at the press conference following an innings and five runs victory over Pakistan in the first Test at Brisbane.

The Woolloongabba Stadium or better known as the Gabba in Brisbane has been the venue for the first match of the Australian summer since a long period, but last year the series against India kicked-off at Adelaide and the Gabba did not feature at all in the entire series.

The Aussie captain is keen to play against India in Brisbane next summer! pic.twitter.com/NCmGqua67s

“We’ll certainly try and we’ll have to run that by Virat,” Paine joked.

“That’s (Gabba) where we like to start our summer and it has been for a long, long time except for last summer. As I said, we’ll ask Virat and see if we can get his permission to play here and maybe even get a pink-ball Test if he’s in a good mood,” he added.

Prior to their historic day-night Test against Bangladesh, Virat Kohli claimed that he was open to playing a pink-ball Test in Australia as long as the team could get a day-night practice match at the venue.