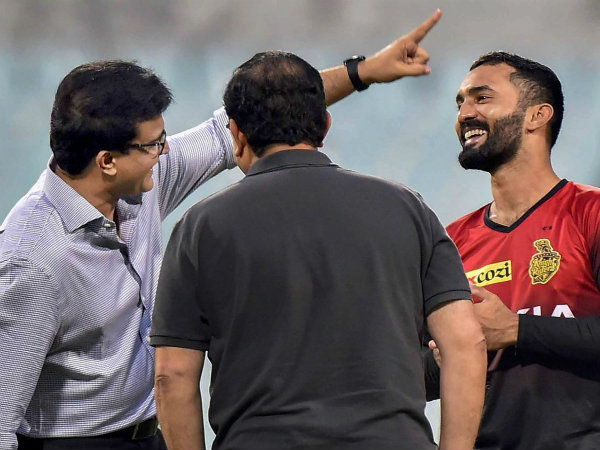 The 2000’s had its fair share of characters in Indian cricket and there are several instances which have now become part of the county’s cricketing legends. And now, Yuvraj Singh has revealed another one of a hilarious mix-up during his playing days. The left-hander recalled about when Dinesh Karthik, slipped and fell on Sourav Ganguly and got yelled at by the former skipper.

Dinesh Karthik who has been with the Indian team since 2004, previously spoke about this incident on a talk show saying,

“I was a substitute in that game and I had to carry drinks to the players. I was running towards the players to give them drinks and accidentally, I slipped and fell on Dada. He got frustrated and yelled, “Where do you get these players from, who is he?”

This video was however aired a long time ago but has suddenly has gone viral after Yuvraj Singh, repeated Karthik’s words. The world cup winning allrounder wrote on Twitter,

The ‘tense game’ wasn’t favourable for India as they were beaten by Pakistan by 3 wickets. Mohammad Yousuf made 81 runs with Irfan Pathan was India’s top performer with figures of 9-1-34-3.
And both Sourav Ganguly and Yuvraj Singh were dismissed for ducks in the match.