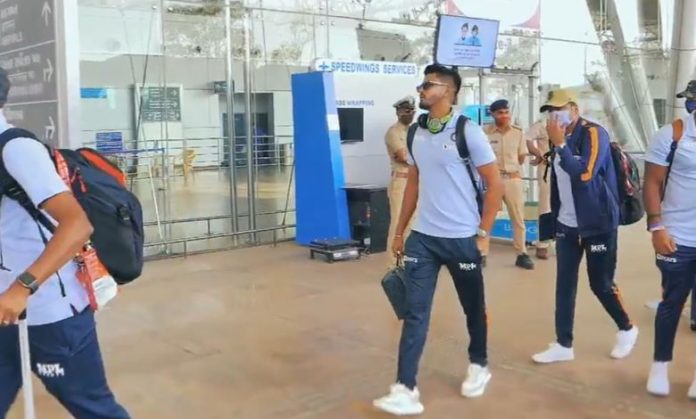 After having won the four-match Test series 3-1 and five-match T20I series 3-2 in Chennai and Ahmedabad respectively, Virat Kohli led Team India are ready to take on England in the three-match One Day International series which is scheduled to begin from March 23. For this, they have arrived in Pune as well.

The Indian Team have arrived in Pune on a Chartered Flight from Ahmedabad at around 4.45 PM. The three ODI matches will be played at the MCA stadium in Gahunje, which is on the outskirts of the city, on March 23, 26, and 28 respectively behind closed doors.

The series is going to be an exciting one as apart from Virat Kohli, the Indian team also has Rohit Sharma, Shikhar Dhawan, Shubman Gill, Shreyas Iyer, Hardik Pandya, Rishabh Pant, Bhuvneshwar Kumar and others who are all in form. On the other hand, India captain Virat Kohli’s recent form in the five-match T20I series is known to all.

Meanwhile, Virat Kohli came to open the innings for India along with Rohit Sharma in the must-win final of the five-match T20I series against England. Before that, Team India used as many as 4 different opening pair for the series. However, others didn’t click much but Kohli-Rohit did wonders as well. After the win in the final, Virat Kohli also expressed his desire to open the innings more often.

“Yes, I’m going to open in the IPL as well. Have batted in different positions in the past but we do have a solid middle order now – it’s about the two best players getting maximum no of balls in T20 cricket. I’d like to partner Rohit at the top and the other guys feel confident when one of us are in. I’d like that to continue,” Virat Kohli has revealed at the post-match presentation.

While many were surprised with this move, former India captain Sunil Gavaskar backed him, saying that he should continue to open for India.

“Your best batsman should bat the most number of overs in limited-overs cricket. So it was very important for Virat Kohli to bat at the top of the order. So maybe, KL Rahul’s loss of form has been a blessing in disguise because this has given us an opening combination to look forward to. Like when Sachin Tendulkar was batting down the order in ODIs and then he was sent up to open the batting and what a transformation it had not just on his batting but the whole team. So clearly, your best batsman have to bat as many overs as they can,” Sunil Gavaskar said to India Today.