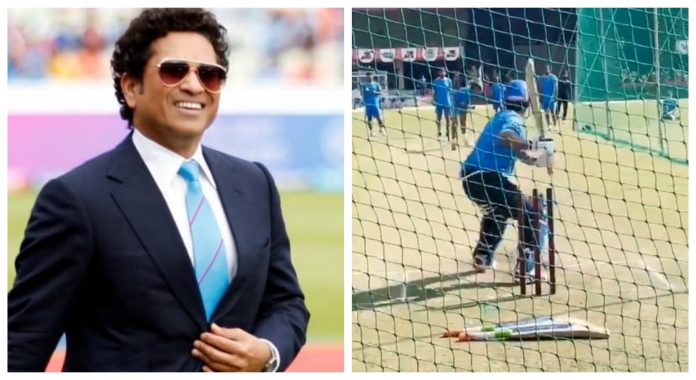 Batting maestro Sachin Tendulkar has once again hit the net as he was seen practising with his brilliant shots for the Road Safety World Series. He posted a video on Twitter on Friday where he was seen smashing like before. In the 14-second video, the batting legend can be seen with his amazing upper-cut and sweep shot as well.

“Stepping on the field for India always gives me goosebumps. Looking forward to playing for our country, and spreading awareness about road safety through the #RoadSafetyWorldSeries,” Tendulkar shared the tweet with this caption.

Notably, the hosts India Legends will play against Bangladesh Legends in the first match at the Shaheed Veer Narayan Singh International Cricket Stadium in Raipur on Friday. Howveer, after seeing the video, fans started commenting on Twitter and shared heart-warming messages for former India player as well.

Stepping on the field for India always gives me goosebumps.
Looking forward to playing for our country, and spreading awareness about road safety through the #RoadSafetyWorldSeries. pic.twitter.com/ld6fnPdfCY

While a user wrote, “We all are very excited to see you back in action,” another one shared: “The Big Day Has Finally Arrived & Life Will Be Great Again Welcome Back GOD.”

Sachin Tendulkar along with Yuvraj Singh and other former Indian players have already reached Raipur for the six-team tournament on Tuesday. However, the team has other renowned players like Irfan Pathan and Yusuf Pathan, who will also take part in the Road Safety World Series.

It is also noteworthy that, the tournament comprises six teams from India, England, South Africa, Sri Lanka, West Indies and Bangladesh. And apart from the above mentioned Indian players, there will be other famous stars too like Kevin Pietersen, Brian Lara, Brett Lee, Herschelle Gibbs, Muttiah Muralitharan and Marvan Atapattu. They will also return to the action for the noble cause as well.

The semi-finals of the tournament will take place on March 17 and 18 whereas the final is slated to be played on March 21. And, this tournament is going to be nothing short of entertainment and memories for fans as well.