Rishabh Pant is one of those Indian wicketkeeper- batsmen who is pinned as Mahendra Singh Dhoni’s successor though his batting looks settled but it is his wicket-keeping which has let India down on several occasions. The young Indian sensation has always looked promising and could well be India’s X-factor in the T20 World Cup next year in Australia. With India all-set to play the second odi in Trinidad, the flamboyant wicket-keeper posted a video on Instagram where it was seen that the former was sharpening his skills in the hotel lobby with Kuldeep Yadav ahead of the second One-day International against West Indies on Sunday. 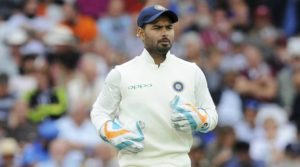 In the absence of India’s No.1 Wicketkeeper Mahendra Singh Dhoni who has taken a two months leave to serve the Indian Army, Rishabh Pant has been handed the duties with the gloves.

The dedication shown by the duo not only inspired many fans to leave comments but also their teammate Yuzuvendra Chahal to write: “What a dedication”.

The first ODI against the Caribbean’s was washed at Guyana and only 13 overs could be played where India took the priced wicket of the Chris Gayle.

The players will be hoping for a full game on Sunday and would also like to win the series. The fans will be hoping that Pant’s hard work pays off and the Indian Cricket Team takes a lead in the 3-Match One Day series.