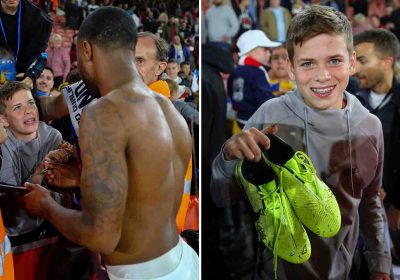 Raheem Sterling has been an anti-bullying, anti-racism and anti-hate symbol in the UK and globally using football and his reach as platforms. It so seems that the Manchester City forward can’t stop making great gestures.

Raheem Sterling has scored a bunch of goals in the Premier League already and is leading the top scorers chart with 6 goals. Last night against Kosovo, the speedster opened England’s scoresheet in the 8th minute.

However, it was after the game, which ended 5-3 for England, that Sterling made happen the best moment of the game. On the request of a physically challenged young fan for Sterling’s boots , the Englishman pulled them off his feet to make the lad’s day.