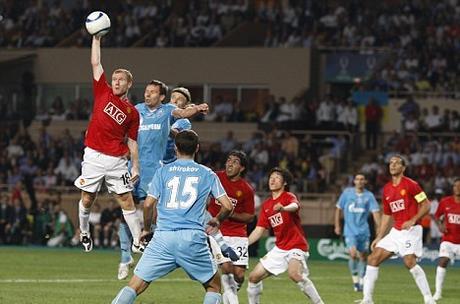 Paul Scholes was one of the most technically gifted footballers of his era. Often compared to an all time great – Andres Iniesta, Scholes also was a role model football player. However, there were few moments for Scholes which weren’t complimentary of who Scholes truly was.

A major example of that is the infamous handball goal against Zenit St. Petersburg in the UEFA Super Cup in 2008. Scholes rose 10 feet in the to , not head but hand the ball into the net. Watch the clip here :

“When someone gets sent off by punching the ball… it’s a bit unfortunate, it was an instinctive thing,” a surprisingly sympathetic Sir Alex Ferguson told reporters, per Goal, after the match.

Indeed, it was instinctive but also incredibly beautiful as a skill on its own.