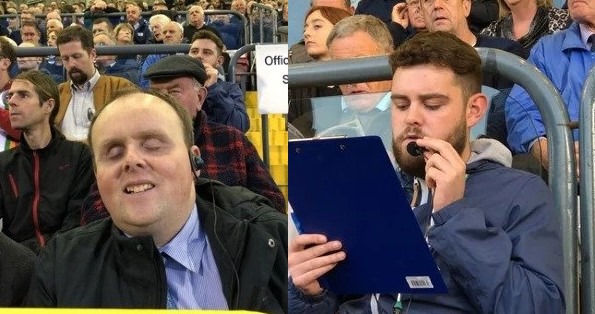 Kevin Kelly raises his hands to his face and jumps out of his seat while the crowd behind him uproars as Bohemian FC were denied by the crossbar during their match Waterford FC at Dalymount Park. The 32-year-old Kevin, who lost his sight following a retinal detachment in 2001, usually follows his club through the radio, but last night he experienced the thrills of the beautiful game for the first time in almost 20 years, thanks to a new initiative from Bohemians and the National Council for the Blind in Ireland (NCBI). They club and the council have teamed up to make live games more accessible to visually impaired football fans through audio description.

Kevin Kelly has just experienced a live League of Ireland game for the first time in almost 20 years, thanks to a new initiative for visually impaired football fans ⚽ pic.twitter.com/krK67kB1SX

“This is the very first time in the League of Ireland that there will be audio described commentary for visually impaired people. This is happening at other clubs across Europe. So, I thought we should offer it to fans here too. Sport should be accessible for everyone,” said James Flanagan, a visual impairment specialist at NCBI.

James and his team are doing a fantastic job providing audio description to visually impaired fans at the stadium. While, the live commentary comes in through an ear piece in one ear, the other ear is left free to hear the crowd and match noises.

And Kevin who is just as excited as the rest of the home supporters around him, spoke on this new and unique experience.

“Tonight, is a historic night for people who are blind and visually impaired in Ireland. There are 54,000 people living in Ireland with sight loss. Quite a number of them have a real interest in football.”

“There’s nothing better to make you feel part of your community than going along and supporting your team” said a delighted Kevin Kelly.

While the NCBI hopes to partner with other clubs next season, this pilot project will run at Dalymount for the rest of the season. Kudos to this heartwarming initiative!