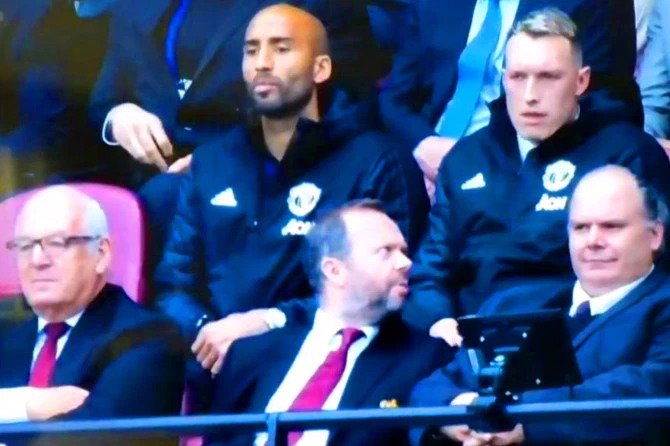 Manchester United fans are definitely convinced that vice-chairman Ed Woodward told ‘Phil Jones off’ while they were spotted at the stands in the London Stadium witnessing the Red Devils slump to West Ham on Sunday. The Sky Sports cameras picked them up during the second half when Jones was chatting to reserve goalkeeper Lee Grant. He was then spotted shaking his head and looked like he muttered something when Woodward turned around to talk. Apparently, the United boss was talking to a female executive sitting who was out of picture, rather than the out-of-favour defender.

But soon, fans on Twitter started sharing their hilarious versions of that incident on what they thought had actually happened in the conversation between Jones and Woodward.

One fan wrote: “Phil Jones being told to shut up by Ed Woodward is exactly what I needed today.

Another said, “Phil, give it a rest. Yes he was 90 million quid but you son, are not a viable alternative. You’re lucky you’re sat behind me and not on the coach. Now shut up.'”

The third one added: “Phil Jones: sacked in the morning. Ed Woodward : we’re on camera, stop.”

"Phil, give it a rest. Yes he was 90 million quid but you son, are not a viable alternative. You're lucky you're sat behind me and not on the coach. Now shut up"

United however, on the pitch, wasn’t so epic with the continuous poor results, and the pressure around boss Ole Gunnar Solskjaer seems like a mountain, who hasn’t won an away Premier League game win since February.