The video of the contest was shared by the official Instagram handle of KKR. “Catch the final episode of Might of the Knights to know who’s powered his way to the winner’s list this time,” KKR captioned the video on the photo and video sharing application.

The competition was organized to find out the biggest six hitter in the KKR team. They also used a power meter to get the precise result.

At the end of round 1, the Caribbean power hitter Russell was leading the table with 360 points.

Here is the scorecard after the first round:

Russell maintained his lead in the second round as well.

Here is the scorecard after the second round:

However, India’s young gun Shubhman Gill overtook Russell in the Penultimate round to finish as the winner. Surprisingly, England’s limited-overs skipper Morgan, who is known for his six-hitting ability, finished at the last spot with 1201 points.

Here is the scorecard after the final round: 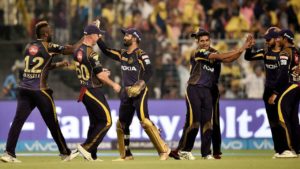 Kolkata Knight Riders will face Virat Kohli’s RCB in their first match in the second leg of IPL 2021. RCB are comfortably sitting in the top four in the points table.

However, KKR had a below average first half of the IPL. They are currently placed at seventh place in the points table. KKR have won only 2 out of their 7 matches. They will look to improve their performance in the second leg in UAE.