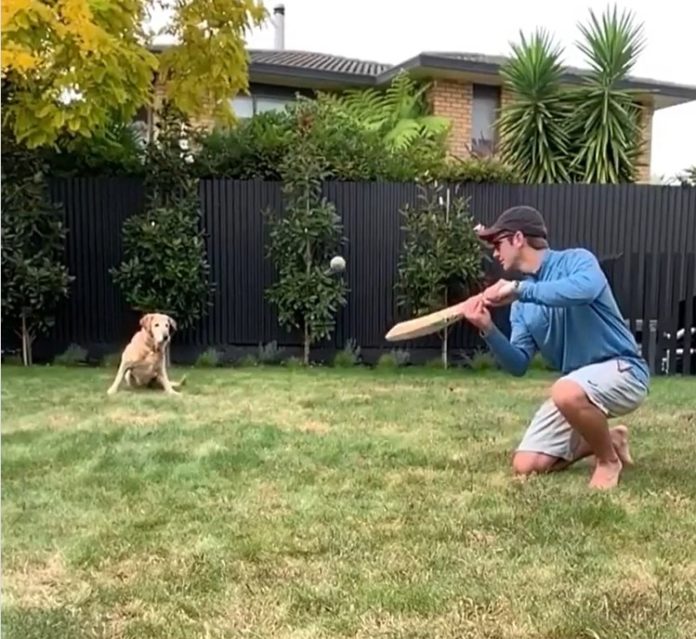 With his country in a coronavirus lockdown, New Zealand skipper Kane Williamson is thoroughly enjoying his idle time by playing cricket with his pet dog Sandy. Yes, you read that right! The Kiwi batsman recently uploaded a video on Instagram, where he can be seen practicing with his canine who turns out to be quite a handy fielder. The 29-year-old was supposed to be India currently, playing for the Sunrisers Hyderabad hadn’t it been for the coronavirus pandemic – but it seems Williamson is ready to play cricket, anywhere with anyone.

On Friday, the World Cup finalist shared a short video on his social media account in which the batter was dismissed by Sandy, (who was in the slips) through an impressive piece of fielding.

“Sandy in the slips! Any other dogs out there joining Sandy? #caninecordon #daytwoisolation.” Williamson captioned the adorable video.

Sandy in the slips! 😀 Any other dogs out there joining Sandy? #caninecordon #daytwoisolation

The post gathered over 175,000 likes with over 350,000 views within no time and several others including England batsman Tom Banton have tried to recreate the video with their pets.

However, Banton’s hilarious upload was the most impressive as his dog did not seem to bother when his human edged the ball to him.

What an idea, no interest though. Tag a mate like this in the slips. 🤣🐕🏏 #hometeam @adidas pic.twitter.com/H491FMDa7w

Last week the Blackcaps captain expressed his gratitude to the doctors, nurses and medical staffs for putting their best efforts to treat the patients to fight out the virus outbreak that has claimed more than 21,000 lives globally.

“Events of the past few days have made it clear we’re living through a health crisis the likes of which we’ve never seen. There will no doubt be times in the coming days when the scale of what we’re facing will seem overwhelming,” Williamson wrote in a column.

“We’re so grateful you have our backs. People talk about the pressure sportsmen and women are under to perform, but the truth is we get to do something we love every day for a living. We play games,” he added.

Earlier this month, the New Zealand captain and his team had to play against Australia at the Sydney Cricket Ground behind closed doors, before the rest of the series was called off.

The Covid-19 pandemic continues to spread throughout the planet and has afflicted more than 6 lakh people as of now.

Kevin Pietersen photoshops himself sitting next to a leopard – and Yuvraj Singh’s reaction is hilarious!