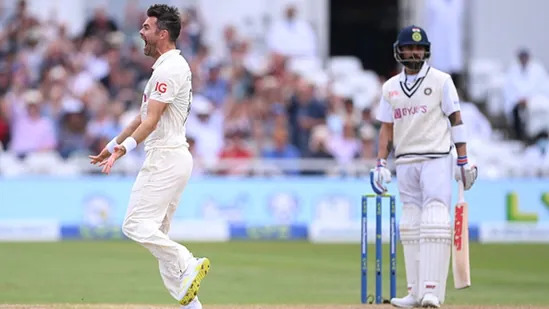 We are into Day 2 of the Test match in the high octane series between India and England and we already have witnessed blockbuster content. For the first time in seven years, James Anderson has dismissed Virat Kohli in Test cricket. What adds salt to the wound is that this time he dismissed him for a golden duck. 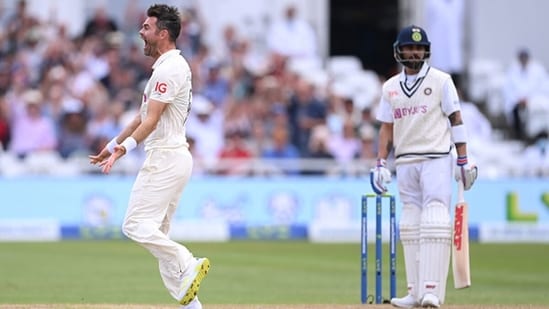 A new chapter has been added to the rivalry between Virat and Anderson. In 2014, the battle was clearly won by Anderson. But in 2018, Virat gained the upper hand. Now in 2021, James Anderson has had a dream start to this rivalry.

Indian openers Rohit and Rahul gave India a terrific start. Both added 97 for the first wicket before Rohit fell to Robinson. Cheteshwar Pujara has continued his poor form. Veteran Anderson was able to find his edge in the 41st over.

Then in walked captain Virat Kohli. He was coming into this game without any match practice. Virat had a stiff back hence he did not play the practice match. His result showed exactly how underprepared he was as he flirted with a ball that was outside off. Anderson was able to nick past the modern-day great on the very first ball. The crowd at Trent Bridge erupted with Joy and greeted Anderson with a great cheer.

Virat Kohli continues his declining form, India under a threat of a batting collapse

Indian captain Virat Kohli hasn’t had a great couple of years in Test cricket. Regardless of the fact that he has failed to score a century in any format, he averages merely 20 in the last two years. This is a huge concern for the Indian team as players like Pujara and Rahane haven’t been scoring consistently. If Kohli starts to fail, then India’s middle order will be a big problem.

From 97 for no loss, India have slipped to 112 for 4. This isn’t the first time India’s batting has disappointed. This won’t be the last time as well if the main middle-order batsmen continue their lean patch. Pressure on the openers and lower-order batsmen like Rishabh Pant will increase immensely if the middle order continues to fail.

Now India has to battle hard to stop a collapse. India were in a great position to stamp their authority in the test match. But from the looks of it, they will have to work harder now to regain the upper hand.